Christian was a physician and the father of the famous Norwegian painter Edvard Munch.

Christian was born 17 September 1817 at Gjerpen, Telemark, the son of the parish priest Edvard Munch and his wife Johanne Sofie Hofgaard. Christian was baptized 15 January 1818 in Gjerpen.[1]

At the age of 17, he was attending the Elever and Skien Laerde Skole in Skien, Telemark.[2]

Christian took his medical degree in 1841 and became an army surgeon.

On 15 October 1861 Christian married Laura Cathrine Bjølstad at Glemmen, Østfold. He was 44 and she was 24 at the time of their marriage.[3]

The family relocated to Oslo in 1864 after Christian was appointed as the medical officer at Akershus Fortress. Four years later, in 1868, Christian's wife died of tuberculosis. After this time, Christian, stricken with grief, became increasingly angry and depressed, often taking this out on his children.[4] To help raise the children, Christian's sister-in-law, Karen, joined the family.

For lodging, Christian chose apartments that were convenient to his work at Akershus Fortress. In 1865 the Munch family lived at Nedre Slotsgade 9. [5] At the time of the 1875 Norway Census, the Munch family was living at Meyersgade 48 in Oslo. Christian, now a widower, and his children: Johanne Sofie, Edvard, Peter Andreas, Laura Catherine, and Ingeborg Marie.[6] Ten years later, at the time of the 1885 census, the family was living at Skaus Plads 1 in Oslo. Christian and his children were living in the household: Edvard, Peter Andreas, Laura Catharine and Inga Marie. Also living with them, helping to care for the family, was Karen Marie Bjølstad, the sister of Christian's deceased wife.[7]

Edvard, Christian's son, later wrote: "My father was temperamentally nervous and obsessively religious—to the point of psychoneurosis. From him I inherited the seeds of madness. The angels of fear, sorrow, and death stood by my side since the day I was born."[8]

Images: 2
Christian Munch with Pipe by his son Edvard Munch 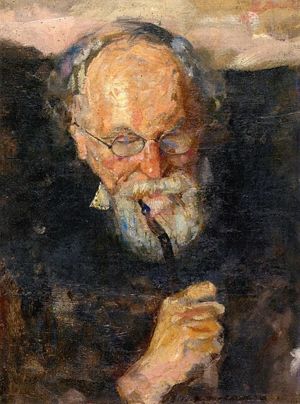 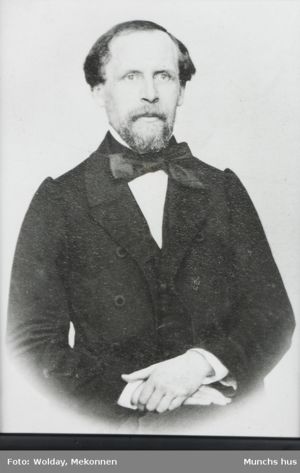