Sophie was the elder sister of the artist Edvard Munch. She died at the age of 15 from tuberculosis.

Her death left a lasting impression on Edvard, so much so that throughout his life Edvard returned to this moment and created a series of portraits of his sister entitled "The Sick Child." Over six completed oil paintings and dozens of studies in various media were created for the series by Edvard over a period of 40 years. [1] The series has been described as "a vivid study of the ravages of a degenerative disease."[2]

Johanne was born 7 September 1862 and christened on 28 October 1862 in Løten. She was the daughter of Christian Munch and Laura Cathrine Bjølstad. [3]

Is Johanne your ancestor? Please don't go away!

ask our community of genealogists a question.
Sponsored Search by Ancestry.com
DNA
No known carriers of Johanne's ancestors' DNA have taken a DNA test. 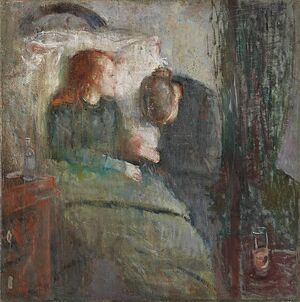