William Munroe is a member of Clan Munro.

William and his brothers Robert, George, and Benedict all fought at the Battle of Worcester. William was sent to the American colonies as a prisoner of war. They were listed on 13 May 1652 on a list of the banished as Munroes: Robert, Hugh, John, and a name obliterated by time, supposedly William. They were shipped to London on 11 Nov 1651 by Je. Rex, Robert Rich, and William Green in the "John and Sarah." If William was an apprentice, it was for a short time. He was on his own by 1657. He is first referred to in the Cambridge, Massachusetts records of 1657 when he and Thomas Rose were fined for not having rings in the noses of their pigs. In 1660 he settled in Cambridge Farms, now known as Lexington, near the Woburn line. This part of town became known as "Scotland." He was a freeman in 1690 and in 1699 received communion into the church.

[1] William Munroe was born in Scotland on October 10, 1625, and belonged to the famous clan bearing that name. He came to America in 1652, probably a prisoner of war taken by Cromwell at the battle of Worcester or soon afterward and sold in service to an American proprietor. William Munroe worked out his time and acquired the property in Cambridge as early as 1657. He settled in Cambridge Farms, now Lexington, in 1660 near the Woburn line his farm being on Woburn Street. He was married three times and though he was forty years old at the time of his first marriage raised a family of thirteen children. He died January 27, 1717, and his will dated November 14, 1716.

The two together had

Imported only 27 JAN 1716 from Death Date and marked as uncertain.

Banished to Boston 1651 by Cromwell after being taken prisoner at Battle of Worcester, arriving in Boston on the “John & Sarah”. Appears as William Row at Cambridge in 1657; a settler of Lexington in 1660; made a freeman in 1690; received into church communion on 02/01/1699; selectman from Cambridge in 1694; no issue by the third marriage 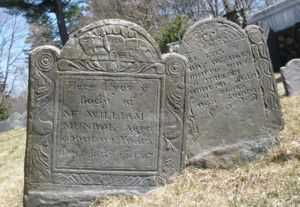 Leave a message for others who see this profile.
There are no comments yet.
Login to post a comment.
Laurence Mohr
The current biography for this profile reads the following:

“William Munroe, son of Robert of Aldie, is the 18th in direct descent from that first Donald who, in the eleventh century, founded the Clan Munro.”

This statement is disputed by Clan Munro USA, which holds the opinion that his parents are unknown. Please see their website for rationale, including a contradictory Y-DNA result.

This dispute has not been clearly addressed in the current version of this profile.

Keith Mann Spencer
I removed all editing I did that may suggest William Munroe may be the son of Robert of Aldie. As of now, we have no clue exactly who the father of William Monroe is.
posted Aug 28, 2020 by Keith Mann Spencer

Bobbie (Madison) Hall
His gravestone says he died 27 Jan 1717/18. Is there another source for the 1716/17 date?
posted Jul 26, 2019 by Bobbie (Madison) Hall
Laurence Mohr
Please note the genealogy accepted for William Munroe [1] by Clan Munro USA shows his parents as "unknown". See the following links for rationale:

posted Jun 26, 2019 by Laurence Mohr
M. Dryden
The confusion appears to stem from the facts that William Munroe's likely father, Robert Munro, Commissary of Caithness, died in or before 1633, as did Robert Munro, 18th of Foulis, who is currently linked to this profile.
posted Jun 25, 2019 by M. Dryden
M. Dryden
William Munroe is undoubtedly under the wrong parents. If William was the son of Robert Munro, 18th Baron of Foulis, would his baronetcy not have been passed down to his son in 1633, rather than to his younger brother Hector? In addition, Hector Munro's Wikipedia page (https://en.wikipedia.org/wiki/Sir_Hector_Munro,_1st_Baronet) mentions that his brother Robert had only daughters.
posted Jun 25, 2019 by M. Dryden