Minnie Murdoch was a British Home Child and was one of many Children Transported to Canada.

(Amy) Marian Louisa Murdoch (aka "Minnie") was born 18 Apr 1861 in Bingham, Nottinghamshire, England, United Kingdom. Her birth certificate is the only place where "Amy" is mentioned.[1][2] The family Bible is a source for her "Minnie" nickname.[3]

On 25 Aug 1861, she was baptized at the Bingham Parish Church in Bingham, Nottinghamshire, England.[4]

At age 10, on the 2 Apr 1871 census of Bordesley, Warwickshire, England, United Kingdom, she is one of four scholars at boarding school, "Ladies School." This is about 25-50 miles from her family's home in Bromsgrove.[5]

In August 1872, her father abandoned the family, and her mother sent several of their young children to Canada as "home children." On 21 May 1874 Minnie left Liverpool, England, arriving in Quebec, Canada on Jun 1st aboard the SS Scandanavian.[6] Once in Canada, she was processed through the Marchmont Home in Belleville, Ontario, Canada.[7] Marchmont's information about her says, "Another of the family of Murdocks who were distributed from Belleville Home. Minnie has proved herself useful, willing and obedient. Very kind with the younger children. Not particular as to choosing her companions. Easily led either right or wrong - a good scholar. The best we have." [Note: "home children" were typically living on farms as indentured servants, cared for, educated, and probably paid a little money.]

According to Marchmont's documents, on 10 Jun 1874, her Canadian address is stated as "Miss McDonald Heathfield @ Williamson, Kingston" [Note that "Heathfield" may be the name of a farm.][7]

According to Marchmont's documents, on 18 Nov 1874, she is noted as living with the Booth family.[7] During Minnie's stay, Mrs. Booth writes Marchmont asking after Fred and Colin "as Minnie has asked for news of them. I really had lost sight of her brothers."

Minnie's Marchmont records say, "1875 Returned to England with her Mother." This probably happened between May and December 1875. This is the time Harriet returns to England from Quebec with Marian, and probably also with three of her other children who traveled round trip with her; Charles, Jessie, and Lucy.[8]

After Minnie's return to England, Marchmont's records for a brother, Colin, mention that Minnie is a nurse in the Royal Infirmary of Manchester, and that their mother is "not living there now."

On 1 Jan 1880, Minnie presented a photo album to her mother. The dedication says, "A present to my dear mother from her loving daughter Minnie."[9]

According to the family Bible, Minnie died 17 Jun 1887, aged 26, cause of death and location are unspecified; the date is not necessarily accurate.[3] Family lore says that Minnie was not married and had no children. She graduated as a nurse, and was a Matron of large hospital in London, England. She died when she was about 27 years old.[10] More family lore says that she died after an attempted abortion in 1887.[11]

After an extensive search, commissioned in 2016, by a professional genealogist, no records could be found of Minnie's death (date, place, cause) or of her association with the Manchester Royal Infirmary.

Click to the Changes page for the details of edits by John and others.

ask our community of genealogists a question.
Sponsored Search by Ancestry.com
DNA Connections
It may be possible to confirm family relationships with Minnie by comparing test results with other carriers of her ancestors' mitochondrial DNA. However, there are no known mtDNA test-takers in her direct maternal line. It is likely that these autosomal DNA test-takers will share some percentage of DNA with Minnie: 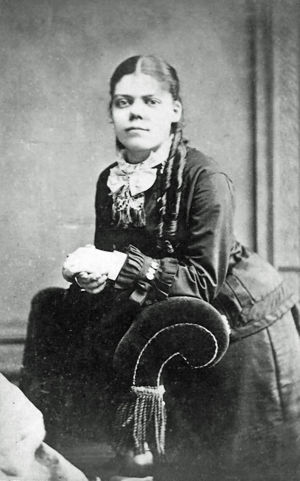