Walter Murdoch was a British Home Child and was one of many Children Transported to Canada.

This profile is part of the Murdoch Name Study.

Walter MacIntosh Murdoch, the fifth child of David and Harriet Murdoch, was born in Fisher Lane, Bingham, Nottinghamshire on September 26 1865. His father had been posted to this small market town by the Excise Department in 1861, and four of his siblings were also born here.

Soon after David and Harriett were married in Worcester in 1859, David was appointed as an Excise Officer to Birr, County Offaly, in Ireland. Roderick, their eldest son was born there in April 1860. In September that year, David was transferred to Bingham, Nottinghamshire, where the family spent the next 6 years and where their next five children including Walter were born.

In December 1866, David was moved to Wirksworth in Derbyshire “at the displeasure of the Board”, the first indication we have that he was not the ideal public servant. He may have been moved frequently over the next few years [we have no formal Excise Board records] and the next two children’s births were registered in Wakefield, Yorkshire where Harriett’s mother was living [Charles, 1868], and in Liverpool [David, stillborn 1870]. The April 1871 census shows the family in Bromsgrove, Worcestershire, where David was still described as an excise-man, but by August 1872 they are living in Monmouth, Wales, where the last child, Lucy, was born. David’s name appears on her birth certificate as the father and informant: his occupation then is described as “commercial”.

At some stage around this time, David abandoned the family and emigrated to Sydney, Australia where he took up a similar post in the Customs Refineries and Distilleries Office for a few years between 1875 and 1878. He was befriended there by his brother-in-law Fred Parkes who had enlisted in the British army in October 1872 but later emigrated. David died of the effects of “intemperance and congestion of the lungs” in July 1879. He is buried in Rookwood Mausoleum, Sydney, with a headstone.

Even before the birth of Lucy, Frederick at the age of 8 was the first of seven Murdoch children to be shipped to Belleville, Ontario, Canada under the auspices of Miss Annie MacPherson’s organisation caring for destitute children. We know virtually nothing of what lead up to this dramatic breakup of the family. On arrival, the circumstances were summarised: “Parents living at Monmouth where father was Revenue Officer, expelled for drink. Now in trying circumstances.” Walter, Colin and Roderick followed in 1873 and Marion in 1874. Harriett seems to have settled in Manchester, but crossed the Atlantic herself in 1875 with Jessie, Charles and Lucy, soon returning with them and with Marion/Minnie, leaving four boys in Ontario. Charles later returned independently to North America as a young man: all five boys [Roderick, Frederick, Walter, Colin, and Charles] eventually lived out their lives in the USA.

Walter (7) and Colin (6) travelled out from Liverpool together on the SS Moravian, arriving in June 1873. They were taken in to the Marchmont Home in Belleville, Ontario, as their brother Fred had been a year before. Walter was placed first with a family in Kingston 50 km east of Belleville and 3 years later he was reported as being well and happy with a farmer’s family. By 1879 (at 15) he was going to school and started to learn the violin he had purchased. The 1881 census shows Walter at 15, still lodging with Wood family in Ernestown, Ontario.

In 1883 (at 17) he was working in a flour mill in nearby Deseronto, but by 1885 Walter was a successful barber with a shop of his own in Hamilton. In 1883 he had married Anne Ballantyne, a woman from Quebec with whom he had two children, Lillian [born 1883] and Walter Macintosh II [born December 1888], but in June 1888 he disappeared to Chicago leaving his family behind in Ontario. Anne never married again and because Walter M jnr had no sons, there are no further Murdochs in that line.

Around 1890, Walter snr married again, this time to Elizabeth MacPherson, a woman from Ardclach parish in Nairnshire where Walter’s grandfather John had been brought up. By 1900 they were living near Des Moines, Iowa with their three children - Charles Roderick, Donald Alexander and Thomas David. Ten years later, in 1910, they had a fourth child Jessie Harriett, and it appears that all were named after Walter’s parents and siblings. These four had many descendants, all living in the US.

In 1911, Walter’s sister Lucy Bradbury Wainwright came to visit from Nantwich, UK as part of a tour of the US which included visits to brother Fred in Meriden, Conn (who financed it), and brother Colin in Tacoma, Washington.

Walter earned his living as a barber in Des Moines. He died in Polk, Des Moines in October 1916 and is buried there. He left a widow Elizabeth and four children.

Travel
BET MAY AND JUL 1911
for a sibling reunion/Indianola, Warren, Iowa, USA[8]

AFT 18 JUN 1873
and was processed through Marchmont Home/Belleville, , Ontario, Canada[10]

Paternal and maternal relationships are confirmed by a Family Finder test match between Donald Milton Murdoch and his second cousin Dorothy Johnson Hughes. Their MRCAs are their great grandparents, David Murdoch and Harriet Jemima Parkes, FTDNA predicted relationship: 1st Cousin to 3rd Cousin, based on sharing 381 cM across 32 segments.

N573UK census: 1871: 6, with parents and 5 sibs in Bromsgrove.
He left the UK aboard the SS Moravian on 5th June 1873 and arrived inQuebec on 18th June, aged 7. [the 2009 Barnardos information adds along with Colin]
Data on children and g-children from Colin Murdock's tree
Lucy visited the brothers in 1910, She went to Indianola, Iowa (nr Des Moines), and as none of the other brothers lived there, this is probably Walter's address.
1881, 15, in Ernestown, Ontario, Canada lodging with Wood family
1895 and 6; 1900 etc : references in Des Moines City Directory [not viewed in Fold3]
US Census 1900 (and 1905): 34, in Indianola City, Warren, Iowa, US with wife Lizzie [32]. and shildren Charles [9], Don [7], Thomas [4]
US Census 1910: same family :44, in Indianola City, Warren, Iowa, US with wife Lizzie [42]. and shildren Charles [19], Don [17], Thomas [14], Jessie [7]
US census: 1910: Warren, Iowa, USA Sharon thinks he may have had a previous wife, especially as he didn't follow the Scottish custom and name a son after himself (i.e. there may be a son Walter by a previous marriage) Perry Snow's 13 Oct 2008 email to me (Sharon Primbsch) about Walter says that he was with the McPherson organization, and that the distribution home was "Galt" [town of Galt, Ontario is now named Cambridge] .See "The British Home Children Registry" at http://freepages.genealogy.rootsweb.ancestry.com/~britishhomechildren/surnames.htm. I provided data to Perry Snow' registry by emailing my file BritishHomeChildren.xls to him. This file contains data for all five of "our" Murdoch Home Children. John Sayers' email to me (Sharon Primbsch) says the 1881 Canadian census puts "Wolter Murdock" in Ernestown, Lennox, Ontario (east end of Lake Ontario), and puts Colin "Merdock" in Haldimand, Northumberland West, Ontario (west end of Lake Ontario). Sayers' suggests that they went through the Belleville Home, Marchmont. Sayers also says they came via Annie MacPhersons homes which was one of the better sending agencies. Annie was Scottish and brought the second group of children to Canada in 1869, soon after Maria Rye. She opened a second home in Galt, Ontario (later moved to Stratford, Ontario), and in 1877 the groupof three sisters opened a home in Knowlton, Quebec (where Louisa BirtMacPherson sent her children from Liverpool). Sayers says that it wasn't easy to determine to which home the children had been sent. They tended to divide the children up, particularly between Belleville and Galt. The MacPherson homes were taken over by Barnardos in 1924. At that time, the MacPherson records were purged somewhat before they were sent to Barnardos. Since the Murdoch boys came very early, Barnardos may not have a record of them. Sayers recommends two books: 1) "Marchmont Distributing Home, Belleville, Ontario, 1870-1925", by James S. Gilchrist; and 2) "The Children's Home Finder", by Lillian M. Birt,published 1913 (may be hard to find).
ancestry.com's Patrick Family Tree says that Walter died in Philadelphia, Philadelphia, Pennsylvania, USA. It's unclear whether Walter died 13 Oct 1916 or was buried on that date.

ask our community of genealogists a question.
Sponsored Search by Ancestry.com
DNA Connections
It may be possible to confirm family relationships with Walter by comparing test results with other carriers of his Y-chromosome or his mother's mitochondrial DNA. Y-chromosome DNA test-takers in his direct paternal line on WikiTree: It is likely that these autosomal DNA test-takers will share some percentage of DNA with Walter: 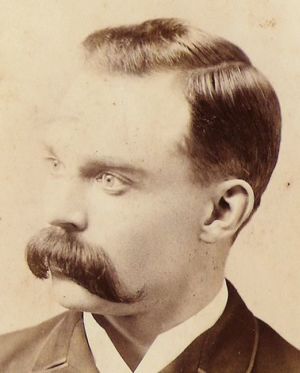