He first gained prominence during World War II with a series of live radio broadcasts from Europe for the news division of CBS. During the war he recruited and worked closely with a team of war correspondents who came to be known as the Murrow Boys" (wikipedia excerpt).

Is Edward R. your ancestor? Please don't go away!

ask our community of genealogists a question.
Sponsored Search by Ancestry.com
DNA Connections
It may be possible to confirm family relationships with Edward R. by comparing test results with other carriers of his ancestors' Y-chromosome or mitochondrial DNA. However, there are no known yDNA or mtDNA test-takers in his direct paternal or maternal line. It is likely that these autosomal DNA test-takers will share some percentage of DNA with Edward R.: 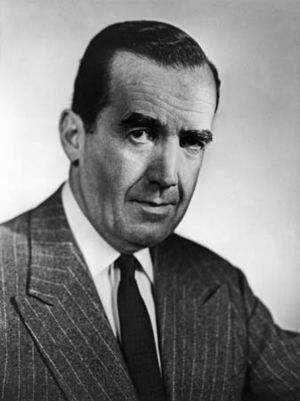 We plan on featuring Edward alongside Larry King, the Example Profile of the Week in the Connection Finder on January 27th. Between now and then is a good time to take a look at the sources and biography to see if there are updates and improvements that need made, especially those that will bring it up to WikiTree Style Guide standards. We know it's short notice, so don't fret too much. Just do what you can. A Team member will check on the profile Tuesday and make changes as necessary.