Edda was born in 1910. She was the daughter of Benito Mussolini and Rachele Guidi. She passed away in 1995.

Edda Mussolini Ciano was the eldest child of Benito Mussolini, Italy's fascist dictator from 1922 to 1943, and Rachele Guidi. She was also the wife of fascist propagandist and foreign minister Galeazzo Ciano. Then, she became "Countess of Cortellazzo and Buccari". After the World War II, Edda wrote her autobiography "La mia vita", published in translation as "My Truth" by Weidenfeld & Nicolson in 1975.

Is Edda your ancestor? Please don't go away!

ask our community of genealogists a question.
Sponsored Search by Ancestry.com
DNA
No known carriers of Edda's DNA have taken a DNA test. 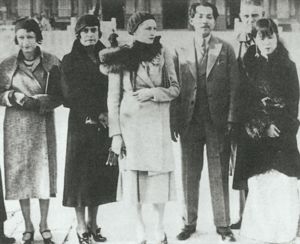