The following two profiles refer to the same person and should be merged:

Muhammad (Arabic: محمد‎‎; pronounced [muħammad] ) was born in the Year of the elephant (approximately 570 CE) in the Arabian city of Mecca. Some 20th century scholars have suggested different years, such as 568 or 659. His more complete name was Abū al-Qāsim Muḥammad ibn Abd Allāh ibn ʿAbd al-Muṭṭalib ibn Hāshim. His birthday is believed to be in the month of Rabi' al-awwal. [1]

He belonged to the Banu Hashim clan, part of the Quraysh tribe, and was one of Mecca's prominent families, although it appears less prosperous during Muhammad's early lifetime.[1]

Muhammad's father, Abdullah, died almost six months before he was born. According to Islamic tradition, soon after birth he was sent to live with a Bedouin family in the desert, as desert life was considered healthier for infants; some western scholars reject this tradition's historicity. Muhammad stayed with his foster-mother, Halimah bint Abi Dhuayb, and her husband until he was two years old. [1]

Childhood and Youth as Orphan

At the age of six, Muhammad lost his biological mother Amina to illness and became an orphan. For the next two years, until he was eight years old, Muhammad was under the guardianship of his paternal grandfather Abd al-Muttalib, of the Banu Hashim clan until his death. He then came under the care of his uncle Abu Talib, the new leader of the Banu Hashim.[1]

According to Islamic historian William Montgomery Watt there was a general disregard by guardians in taking care of weaker members of the tribes in Mecca during the 6th century, "Muhammad's guardians saw that he did not starve to death, but it was hard for them to do more for him, especially as the fortunes of the clan of Hashim seem to have been declining at that time." [1]

In his teens, Muhammad accompanied his uncle on Syrian trading journeys to gain experience in commercial trade. Islamic tradition states that when Muhammad was either nine or twelve while accompanying the Meccans' caravan to Syria, he met a Christian monk or hermit named Bahira who is said to have foreseen Muhammad's career as a prophet of God.[1]

At the age of 25, Muhammad married the wealthy Khadijah bint Khuwaylid who was 40 years old. The marriage lasted for 25 years and was a happy one. Muhammad did not enter into marriage with another woman during this marriage.[1]

Muhammad would periodically seclude himself in a mountain cave named Hira for several nights of prayer. At the age of 40 he reported being visited by Gabriel in the cave, where he stated he received his first revelation from God. Three years later, in 610, Muhammad started preaching these revelations publicly. He proclaimed that "God is One", that complete "surrender" to him is the right course of action, and that he was a prophet and messenger of God, similar to the other prophets in Islam. [1]

619 Death of Khadijah and Loss of Protection

Muhammad's wife Khadijah and uncle Abu Talib both died in 619, the year thus being known as the "year of sorrow". With the death of Abu Talib, leadership of the Banu Hashim clan passed to Abu Lahab, a tenacious enemy of Muhammad.

Soon afterwards, Abu Lahab withdrew the clan's protection over Muhammad. This placed Muhammad in danger; the withdrawal of clan protection implied that blood revenge for his killing would not be exacted.

Muhammad then visited Ta'if, another important city in Arabia, and tried to find a protector, but his effort failed and further brought him into physical danger. Muhammad was forced to return to Mecca. A Meccan man named Mut'im ibn Adi (and the protection of the tribe of Banu Nawfal) made it possible for him to safely re-enter his native city. [1]

Muhammad is said to have had thirteen wives in total (although two have ambiguous accounts, Rayhana bint Zayd and Maria al-Qibtiyya, as wife or concubine. Eleven of the thirteen marriages occurred after the migration to Medina.[1]

Muhammad's marriages after the death of Khajida were contracted mostly for political or humanitarian reasons. The women were either widows of Muslims killed in battle and had been left without a protector, or belonged to important families or clans whom it was necessary to honor and strengthen alliances with.[1]

After Khadija's death, Khawla bint Hakim suggested to Muhammad that he should marry Sawda bint Zama, a Muslim widow, or Aisha, daughter of Um Ruman and Abu Bakr of Mecca. Muhammad is said to have asked for arrangements to marry both. [1]

According to traditional sources Aisha was six or seven years old when betrothed to Muhammad, with the marriage not being consummated until she had reached puberty at the age of nine or ten years old. She was therefore a virgin at marriage. Muslim authors who calculate Aisha's age based on other sources of information, such that available about her sister Asma about whom more is known, estimate that she was over thirteen and perhaps in her late teens at the time of her marriage.[1]

After migration to Medina, Muhammad (now in his fifties) married several more women.[1]

Muhammad did household chores and helped with housework such as preparing food, sewing clothes, and repairing shoes. He is also said to have had accustomed his wives to dialogue; he listened to their advice, and the wives debated and even argued with him.[1]

Nine of Muhammad's wives survived him. Aisha, who became known as Muhammad's favourite wife in Sunni tradition, survived him by decades and was instrumental in helping assemble the scattered sayings of Muhammad that form the Hadith literature for the Sunni branch of Islam.[153][1]

622 Hijra: Migration from Mecca to Medina

To escape persecution, Muhammad sent some followers to Abyssinia before he and his followers migrated from Mecca to Medina (then known as Yathrib) in the year 622. This event, the Hijra, marks the beginning of the Islamic calendar, also known as the Hijri Calendar. In Medina, Muhammad united the tribes under the Constitution of Medina. [1]

In December 629, after eight years of intermittent conflict with Meccan tribes, Muhammad gathered an army of 10,000 Muslim converts and marched on the city of Mecca. The attack went largely uncontested and Muhammad seized the city with little bloodshed.

In 632, a few months after returning from the Farewell Pilgrimage, Muhammed fell ill and died. Before his death, most of the Arabian Peninsula had converted to Islam.[1]

The tomb of Muhammad is located in the quarters of his third wife, Aisha. (Al-Masjid an-Nabawi, Medina)[1]

From a secular historical perspective he was a religious, political, and social reformer who founded the religion of Islam. [4] [5]

From an Islamic perspective, he was God's Messenger (rasūl Allāh) sent to confirm the essential teachings of monotheism preached previously by Adam, Abraham, Moses, Jesus, and other prophets. [4][6] [7] [8]

Khadijah is said to have had four daughters with Muhammad and two sons. The two sons died in childhood. All but one of his daughters, Fatimah, died before him. [1]

Zayd ibn Harith was a slave that Muhammad bought, freed, and then adopted as his son. He also had a wetnurse.[246] According to a BBC summary, "the Prophet Muhammad did not try to abolish slavery, and bought, sold, captured, and owned slaves himself. But he insisted that slave owners treat their slaves well and stressed the virtue of freeing slaves. Muhammad treated slaves as human beings and clearly held some in the highest esteem".[1]

An article discusses how some popular genealogies show a line of descent from Muhammed to many living people in Europe, and identifies the flaws in those lines of descent. As WikiTree are subjected to research and refinement, it is expected that these weak links will be identified and the linkages disconnected.

Some people have actually tried to establish a documented line between Muhammad, who was born in the 6th century, and the medieval English monarchs, and thus to most if not all people of European descent. [9]

Nobody has succeeded yet, but one proposed lineage comes close. [9]

Though it runs through several strongly suspicious individuals, the line illustrates how lines of descent can wander down through the centuries, connecting famous figures of the past to most of the people living today. [9]

The proposed genealogy runs through Muhammad's daughter Fatima. Her husband Ali, also a cousin of Muhammad, is considered by Shiite Muslims the legitimate heir to leadership of Islam. [9]

Ali and Fatima had a son, al-Hasan, who died in 670. About three centuries later, his ninth great-grandson, Ismail, carried the line to Europe when he became Imam of Seville. Many genealogists dispute the connection between al-Hasan and Ismail, claiming that it includes fictional characters specifically invented by medieval genealogists trying to link the Abbadid dynasty, founded by Ismail's son, to Muhammad. The Abbadid dynasty was celebrated for making Seville a great cultural center at a time when most of Europe was mired in the Dark Ages.

The last emir in that dynasty was supposed to have had a daughter named Zaida, who is said to have changed her name to Isabel upon converting to Christianity and marrying Alfonso VI, king of Castile and Leon. [9]

Yet there is no good evidence demonstrating that Isabel, who bore one son by Alfonso VI, is the same person as Zaida. So the line between Muhammad and the English monarchs probably breaks again at this point. But if you give the Zaida/Isabel story the benefit of the doubt too, the line eventually leads to Isabel's fifth great-granddaughter Maria de Padilla (though it does encounter yet another potentially fictional character in the process). [9]

Timeline of the Prophets Life

Is Muhammad your ancestor? Please don't go away!

ask our community of genealogists a question.
Sponsored Search by Ancestry.com
DNA
No known carriers of Muhammad's DNA have taken a DNA test. 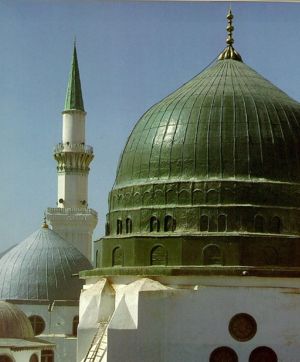 Leave a message for others who see this profile.
There are no comments yet.
Login to post a comment.
Graham Lester
The current Wikitree contradicts the "Genealogical Line Between Muhammed and Europeans" narrative set out here because it allows a direct connection between Muhammad and the European monarchs through Aisha Omeya, supposed daughter of Ruquya (Muhammed) Omeya. It seems that there is little or no reason to suppose that Aisha was actually Ruquya's daughter.
posted Jan 25, 2018 by Graham Lester

Mahmood Bhatti
Prophet Of Islam-1 and Al Mustafa Hashemites-1 appear to represent the same person because: I would like to join the trusted list to work on this exalted profile - may Allah give me strength to do this (Amen)
posted Jul 21, 2014 by Mahmood Bhatti

Muhammad is 41 degrees from Jaki Erdoes, 40 degrees from Wallis Windsor and 29 degrees from Henry VIII of England on our single family tree. Login to find your connection.