Fernando I "el Magno," King of Castile and León

Ferdinand I (1017 – 24 June 1065), called the Great (El Magno), was the son of Sancho III of Navarre and Mayor of Castile, and became Count of Castile from his uncle's death in 1029. Having acquired the Kingdom of León after defeating his brother-in-law in 1037, he became King of León and Castile. He had himself crowned Emperor of Spain in 1056.

Ferdinand was barely in his teens when García Sánchez, Count of Castile, was assassinated by a party of exiled Castilian noblemen as he was entering the church of John the Baptist in León, where he had gone to marry Sancha, sister of Bermudo III King of Leon. In his role as feudal overlord, Sancho III of Navarre nominated his younger son Ferdinand, born to the deceased count's sister Mayor, as successor, and further arranged for Ferdinand to marry García's intended bride, Sancha of León.

On his father's death, Ferdinand continued as count of Castile, now recognizing the suzerainty of his brother-in-law Bermudo III, but they fell out and on 4 September 1037 Bermudo was killed in battle with Fernando at Tamarón. Ferdinand took possession of León by right of his wife, who was the heiress presumptive, and the next year had himself formally crowned king of León and Castile. He overran the Moorish section of Galicia, and set up his vassal as count in what is now northern Portugal. With northern Iberia consolidated, Ferdinand, in 1039, proclaimed himself emperor of Hispania. The use of the title was resented by the Emperor Henry III and Pope Victor II in 1055 as implying a claim to the headship of Christendom and as a usurpation of the Roman Empire. It did not, however, mean more than that the sovereign of León was the chief of the princes of the Iberian peninsula. Ferdinand's brothers García Sánchez III of Navarre and Ramiro I of Aragón opposed his power, but were both killed in ensuing battles, leaving Ferdinand preeminent.

Ferdinand died on the feast of Saint John the Baptist, 24 June 1065, in León, with many manifestations of ardent piety, having laid aside his crown and royal mantle, dressed in the robe of a monk and lying on a bier covered with ashes, which was placed before the altar of the Basilica of San Isidoro. At his death, Ferdinand divided up his kingdom between his three sons, the eldest, Sancho, receiving Castile and Alfonso being given León, while from the latter the region of Galicia was carved off to create a separate state for Garcia. Ferdinand's two daughters each received cities: Elvira, Toro and Urraca, Zamora. In giving them these territories, he expressed his desire that they respect his wishes and abide by the split. However, soon after Fernando's death, Sancho and Alfonso turned on García, and defeating him they then fought each other, the victorious Sancho reuniting their father's possessions under his control in 1072.

[edit] References This article incorporates text from the Encyclopædia Britannica, Eleventh Edition, a publication now in the public domain. Preceded by García Sánchez Count of Castile 1029-1037 Succeeded by Title Extinct Preceded by Bermudo III (in León) King of León and Castile 1037-1065 Succeeded by Alfonso VI (in León) Sancho II (in Castile) Garcia (in Galicia) Vacant Title last held by Bermudo III Emperor of Spain 1056 – 1065 Vacant Title next held by Alfonso VI of León.

This person was created through the import of Acrossthepond.ged on 21 February 2011.

Is Fernando I your ancestor? Please don't go away!

ask our community of genealogists a question.
Sponsored Search by Ancestry.com
DNA
No known carriers of Fernando I's DNA have taken a DNA test. 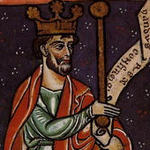 Fernando I is 29 degrees from Donald Howard, 24 degrees from Julia Howe and 15 degrees from Henry VIII of England on our single family tree. Login to find your connection.