Jeanne was Queen of Navarre (Reina de Navarra) and should perhaps be known as Juana. However the rulers of Navarre at this stage were a French family, who were also Counts/esses of Champagne, which is where Jeanne was born.

Imported only 1272 from Birth Date and marked as uncertain.

Joan I of Navarre

Joan was born in Bar-sur-Seine on 14 January 1273. The following year 1274, upon the death of her father, she became Countess of Champagne and Queen regnant of Navarre. Her mother Queen Blanche was her guardian and regent in Navarre. Various powers, both foreign and Navarrese, sought to take advantage of the minority of the heiress and the "weakness" of the female regent, which caused Joan and her mother to seek protection at the court of Philip III of France.

At the age of 10 (based on the date of birth above), Joan married the future Philip IV of France on 16 August 1284, becoming queen of France a year later. Their three surviving sons would all rule as kings of France, in turn, and their only surviving daughter, Isabella became queen consort of England. Queen Joan founded the famous College of Navarre in Paris.

Joan was described as having been a plump, plain woman, whereas her beautiful daughter Isabella resembled her father more in physical appearance.[3] As regards her character, Joan was bold, courageous, and enterprising. She even led an army against the Count of Bar when he rebelled against her.

Joan died in 1305, allegedly in childbirth, though one chronicler accused her husband of having killed her. Her personal physician was the inventor Guido da Vigevano.

With Philip IV of France:

Is Jeanne I your ancestor? Please don't go away!

ask our community of genealogists a question.
Sponsored Search by Ancestry.com
DNA
No known carriers of Jeanne I's DNA have taken a DNA test. 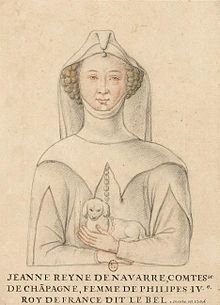