"There was a well known chief of the name Nąga (Keramąnįga), for whom see the Commentary to Kinzie's Wau Bun. However, two people named Nąga Keramąnįga signed the Treaty of 1829, the younger of whom is said to have been the nephew of the other (Lurie, "Check List," ##2-3, p. 53). Lurie's informants told her that the Keramąnįs were originally of Fox or Sauk extraction. Foreign captives who are spared are always put into the Thunderbird Clan, or may enter it through marriage. Mrs. Kinzie said that this name meant, "Walking Rain." This is due to the fact that the name has a double meaning in Hočąk: Ke-ra-mąnį means literally, "The Turtle Walking," where -ra is the definite article. On the face of it, this name is rather peculiar, since the -ga attached to the end of it to indicate that it's a personal name is also a definite article. This leads to the rather stilted translation, "The Walking One Who is the Turtle." However, the same name differently parsed, Kera-mąnį, means "Walking Cloud," where kera, like the more common mąxí, means both "cloud" and "sky." It could be that Kera-mąnį-ga was originally a Thunderbird Clan name for the ancestor of the lineage, but members of that family liked the mystical association that the double meaning gave them to the God of War." Dieterle, Kinzie Rolls, Schedule of Number and Names of Villages, Lodges, and Persons, note 20.

The name Nąga is a Thunderbird Clan name, bestowed not long after birth. Clan names are given to reflect the nature and deeds of the clan's animal or spirit patron (in this case, Thunderbirds). Nąga means, "Tree," a reference to the fact that Thunderbirds so frequently strike trees with their lightning weapon. The name Keramąnįga is an honorific name, won out of respect for his performance in battle, or in this case, the achievements of his ancestors.

The Keramąnįs were said to have been originally of Fox or Sauk extraction. (Lurie, "Check List," ##2-3, p. 53) This is confirmed in a sworn affidavit by Nąga's grandson, Antoine Grignon: "...he had been called out in the Black Hawk war, by the Government of the United States, and that he took up arms in favor of his Country altho it was against the nation of Indians from which he had in part derived his birth ... " (Waggoner, 30) The Black Haw War was fought against the Sauks.

McKinney and Hall (320-321) describe him in some detail. "Nawkaw was a man of large stature and fine presence. He was six feet tall, and well made. His person was erect, his muscles finely developed, and his appearance such as indicated activity and great strength. Like many of his race, he was remarkably fond of dress; and even in the last days of his protracted life, devoted the most sedulous care to the decoration of his person. His portrait affords ample evidence of his taste; the head-dress, the ear-rings, and the painted face, show that the labors of the toilet had not been performed without a full share of the time and study due to a matter of so much importance; while the three medals, presented to him at different times, as the head of his tribe, and as tokens of respect for himself, are indicative of his rank, and are worn with (321) as much pride and as much propriety as the orders of nobility which decorate the nobles of Europe."

We first hear of Keramąnįga at the council called at Prairie du Chien, May 1783, where George McBeath announced the end of the Revolutionary War and the cession of the territory to the United States. On this occasion, "Karimine," spoke for the Winnebago. (2, W. H. C., 170; P.V. Lawson, The Winnebago Tribe, 151). In 1790, he went with Tecumseh on a mission to the Indians in New York. In the War of 1812 he was a close companion of Tecumseh. In the Battle of the Thames, on October 5, 1813, he was standing right next to Tecumseh when a stray bullet struck and killed the famous leader.

He signed the treaties of 1816, 1825, 1829 and 1832. At the Treaty of Prairie du Chien (1829) Caleb Atwater, the chief government negotiator, described Nąga as, "the principal chief, whose wishes governed the Secretary of War, in this matter." At the Priarie "NAWKAW [Nąga] and HOOCHOPEKAH [Hujopka], with their families, eagerly seized my hand, and I was happy indeed, to meet them here. During twenty years, I had seen them several times, and they recognized me in a moment, among the crowd, and assured me of their friendship and good wishes." The language barrier made the personal aspects of the negotiations rather awkward. "If a Winnebago wished me to walk aside, and converse with him by ourselves, as Nawkaw often did, his only way of communicating his wish to me, was to point to his own breast first, then to me next; and finally to that part of the prairie (in which we happened to be standing,) where he wished me to go; he uniformly said, "MAUNEE [mąnį́]," [walk,] and that was the only word which was uttered, until we had retired to the place pointed out and thus designated. When arrived at the spot, the conversation was carried on between us with as few words as possible, using signs for objects, by pointing to them. With his pipe stem or a stick, he would draw in the sand the lines of demarcation, when the limits of the lands to be purchased of his people, were in discussion between us, and a stick was struck in the ground to indicate a corner in the plat. If he approved of my proposition, "oah [ho]," [yes,] was all he said in reply; and I answered him in the same way. If the proposition pleased either of us very much, the reply was uttered with great vehemence, otherwise faintly." At the end of these negotiations, "The day being far spent, and as the loading of the canoes, in which they were about to depart, would necessarily (175) occupy some little time, I informed the chiefs and principal men, that the time had arrived, when we should part to meet no more — that the great gun at the fort would soon be fired, to do them honor. With one accord they all arose, and shaking me heartily by the hand, many of them shedding tears on the occasion, they one and all invited me to visit them, at their respective places of abode. In a shrill tone of voice, Nawkaw issued his orders for every individual to arise, take up his or her goods, and repair to the beach of the river near at hand, and there await the signal from the fort, for their embarkation."

He is sometimes confused with his son, who carried the name of his lineage, Keramąnį; and his nephew who bore the exact same name.

Little Rush Lake Village was said to be under the authority of the elder and famous Nąga Keramąnįga in 1830 and for sometime before, but this must be his nephew of the same name. (Powell, 152-153)

Is Nąga your ancestor? Please don't go away!

ask our community of genealogists a question.
Sponsored Search by Ancestry.com
DNA
No known carriers of Nąga's DNA have taken a DNA test. 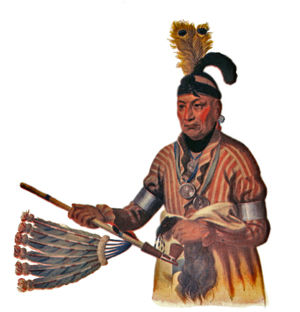 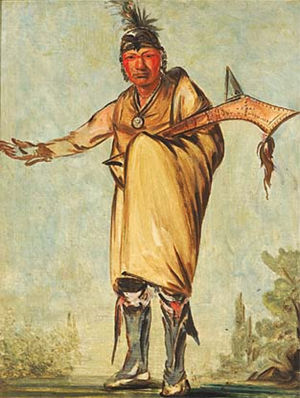 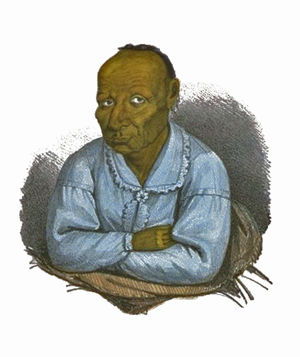