Prince was a Jehovah's Witness

Prince Rogers Nelson, known throughout the world simply as Prince, the prolific, flamboyant, multi-talented singer-songwriter-performer, was born on 7 June 1958 in Minneapolis, Minnesota.

Prince had a prolific output, releasing 39 albums during his life.... He released hundreds of songs both under his own name and multiple pseudonyms during his life, as well as writing songs that were made famous by other musicians, such as "Nothing Compares 2 U" and "Manic Monday". Estimates of the complete number of songs written by Prince range anywhere from 500 to well over 1,000. Prince sold over 150 million records worldwide, ranking him among the best-selling music artists of all time. His awards included the Grammy President's Merit Award, the American Music Awards for Achievement and of Merit, the Billboard Icon Award, an Academy Award [1985 Best Original Song Score], and a Golden Globe Award. He was inducted into the Rock and Roll Hall of Fame in 2004, the UK Music Hall of Fame in 2006, the Rhythm and Blues Music Hall of Fame in 2016, and will be inducted into the Black Music & Entertainment Walk of Fame in 2022.[1]

In a memorial interview in the Washington Post, guitarist Billy Gibbons of ZZ Top praised Prince's technique and singled out the opening guitar solo for Prince's When Doves Cry as "defying description."

Additional sibling and half sibling:

His father played piano in nightclubs after work, using the stage name Prince, and his mother was a nightclub singer.[3] Prince suffered from seizures as a child until the age of 7.[4] His parents divorced when he was about 10. He played basketball and trained in classical ballet.[5][6][7]

Mayte also says that the couple lost a second child, a girl, apparently prior to term.

Prince died at home in Chanhassen, Minnesota at age 57 on 21 April 2016.[12][1] His body was cremated, and the urn, at one time viewable at his Paisley Park Studios, is currently not on display.[13]

Sponsored Search by Ancestry.com
DNA
No known carriers of Prince's DNA have taken a DNA test. 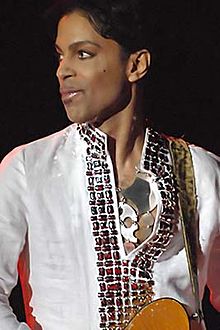 Sarah (Murtaugh) Heiney
I'm not on the Trusted List, but I can see her linked as his daughter. So the Yellow status isn't affecting that. If the concern is that she could be removed, then can't we make him PPP instead of Yellow privacy? (Sorry if I am being obtuse here)
posted Mar 07, 2021 by Sarah (Murtaugh) Heiney

Amanda (Keys) Gibbons
"When I'm writing [songs], some days the pen just goes. I'm not in charge and I'm almost listening outside of it. That's when I realize that we all have to start looking at life as a gift. It's like listening to a color and believing that these colors have soul mates and once you get them all together the painting is complete."

Thank you so much for your Purple Love you gave to us through your music and interviews! Cause, through it all...you taught me how to stand up for myself, how to not care what others thought about me, how to protect my well being, how to be proud of myself and most of all, to unconditionally love all of me. You were much more than a Rock Star, you were a beautiful example of how to shamelessly live life as authentically possible, how to learn from mistakes and apply those lesson to do better, no matter what. You were, are now and always be "The Beautiful One!"

See you in the Afterwrold when I get there! 💜

Amanda (Keys) Gibbons
I don't know where this Heather came from either. I have been totally into Prince since I was 17 years old and I am 58 years old now. I have every album of his, every interview of his on my hard drive, mag articles, you name it. NEVER EVER has he said a word about having a daughter. There are a lot of claims that came forth after his precious soul went to the Afterworld, that have all been debunked. I would have to see hard core evidence that this Heather is is daughter, besides what's said in her profile, before I believe it. Unless there is, that connection should be hidden to accurately preserve Prince's legacy.
posted Jul 13, 2020 by Amanda (Keys) Gibbons

A world of never ending happiness U can always see the sun, day or night"

Hayley Stoddard
May the bass and the music continue on in the after life. You'll be missed.
posted Apr 21, 2016 by Hayley Stoddard

Summer (Binkley) Orman
Rest in peace, brother. You will be missed. Your music contributed to many good times and memories. Particularly, a wild, alcohol-induced karaoke session I once witnessed. Also, when Julia Roberts sang your song in Pretty Woman. Classic moments.
posted Apr 21, 2016 by Summer (Binkley) Orman