The following is drawn from Bates' personal recollections as well as family lore and legends.

Ernest Shirley Nelson was a farmer and farm laborer. He stood about five feet eight inches, weighing about 160 pounds. He was quite bald atop his head, a fact he tried to hide by parting his hair fairly well down the side of his head.

Ernest was fairly healthy most of his life, though he developed stomach ulcers in his 60s, complicated increasingly by diabetes, which was diagnosed about five tears before his death. The two eventually combined to cause his death; in 1965, shortly after being operated on for a bleeding ulcer, he suffered a massive infection from which he never recovered. It was reported to have been the second staph-related death at Franklin County Public Hospital. A massive cleanup followed.

Ernest met Mabel during Ernest’s visit with his Aunt Etta and Uncle Elmer Farr in the River-side section of Haverhill. The Farrs lived at the west corner of the Groveland Bridge; the Bartletts lived next door.

The early years of their marriage were fun-filled, even if restricted by the lack of money. Apparently Ernest and Mabel were poorer than the proverbial church mice, but often out of poverty come priceless treasures. Daughters Dorothy and Florence were born at Haverhill’s Hale Hospital, both by Caesarean section. Floss was brought home (to Riverside) by horse and buggy because the driving was too slippery for a car.

By the mid-1920s the granite-bound Nelson homestead in Goshen was barely capable of sup-porting its sons. Mabel and Ernest found making a living increasingly difficult. In 1924 the answered the siren song of the south. Stephen Bartlett, Mabel’s father, had visited Florida and firmly believed it was the nearest to Heaven anyone would find in this earthly life. For a man of his conviction, this was profound.

Ernest, Mabel, and their daughters left Goshen to join Stephen and Louisa Bartlett and Harrison and Viola Smith in West Palm Beach. They traveled to New York by train, then boarded the coastal steamship “Lenape.” From Charleston, SC, the continued by train to Jacksonville and then to West Palm Beach.

Dot and Floss, then youngsters of 8 and 6 respectively, remember the west coast of Florida as a mysterious land inhabited by Indians. Floss was surprised at their use of safety pins as decoration, while Dot was impressed with the Seminoles’ skirts, a plain basic material to which brightly colored bands were sewn.

Though his father-in-law was moderately successful at real estate, Ernest found their adopted east coast somewhat mysterious, just like his daughters. He purchased a parcel of land in what was to become Coral Gables, only to discover later it disappeared at high tide.

Unfortunately the first Florida Boom had peaked by then. Life, though warmer, was no richer., and in 1926 a hurricane blew them back to the more familiar Goshen surroundings.

Times at home in Goshen were no better, perhaps worse. The family returned, penniless, and the rocky hills of Goshen bore little but the barest subsistence. The winter of 1927-1928 was especially severe. Dorothy was sent to board with her uncle, Rev. Hollis Bartllett, and his family in Worcester, in part because Goshen’s one-room school offered less challenge for the sixth grader’s intelligence. One suspects that one less mouth to feed was also welcome. Christmas, 1927, would have been very bleak indeed, had not several members of Ernest’s and Mabel’s families come to the rescue.

During this winter, Ernest secured a job as “the hired man” at Whitney Farm on Charlestown Road in Claremont. As part of his compensation he received lodging for his family and eggs and other farm produce.

Dorothy related, “Nannie held a family reunion when we lived at Whitney Farm around 1930 or 31. Aunt Ada’s kids were there from Worcester, Bert Littlefield and Aunt Vie’s two were there from Haverhill (Aunt Vie’s two were too young to matter to me, a high school Junior!). Anyway, kids, parents and grandparents added up to 21. Nannie had nightmares for years after-ward about cooking for everyone.

“We all had to sit on the steps to have a group snapshot. When Grammie Bartlett saw it, she cried, ‘Oh Steve! I don’t know whether to proud or ashamed!’ “During this same visit, a gypsy boy walked up the driveway from the main road and started talking with Steve and me. We were shamefully rude to him. Nannie found out and told us they’d put a hex sign on the gate and every gypsy that came along would take revenge. Scared half to death!”

The job at Whitney Farm lasted until early spring 1933, when Mrs. Whitney was forced by economics to lay Ernest off. Providentially, after a short term as landscaper at a mental hospital, Ernest heard, quite by chance, of a position as a farm laborer for Ed Keefe of River Street in Norwell, Massachusetts.. Here, besides room and farm produce for his family, he received a salary of $75 a month, on which he sent both daughters to four-year colleges.

Ernest and Mabel lived in Norwell until the summer of 1941 when they moved to Ashfield. Here Ernest operated the Apple Valley farm purchased by Dorothy, largely with the proceeds from the auction of the farm, stock and equipment of her deceased husband, Lewis Bates. The farm was purchased from Leland and Sylvia Wheeler, who, in turn, had purchased from the estate of Lawrence Willis, Lewis’ deceased brother-in-law.

Ernest raised chickens on the farm until the early 1950s, selling the eggs to a wholesaler in Springfield until it became no longer profitable. In March 1955 the three story apple house burned to the ground, cutting the available floor space for raising chickens in half. That ended his career as a chicken farmer. Ernest and Mabel were staunch members of the Ashfield Congregational Church. Regular church members, Ernest became a deacon, and Mabel was at one point president of the Ladies’ Circle.

Ernest succeeded Frank Eldredge as caretaker of the Ashfield cemeteries in 1954, a position he enjoyed. Later he was a clerk at Elmer’s Store for a while. Mabel and Ernest began wintering with Mabel’s sister, Viola, at Plum Island (near Newburyport about 1953. As they grew older, they spent more and more time at Plum Island and less at their Apple Valley home.

Ernest passed away November 16, 1965 at Franklin County Public Hospital of complications from diabetes, and Mabel followed in 1978.

ask our community of genealogists a question.
Sponsored Search by Ancestry.com
DNA Connections
It may be possible to confirm family relationships with Ernest by comparing test results with other carriers of his Y-chromosome or his mother's mitochondrial DNA. However, there are no known yDNA or mtDNA test-takers in his direct paternal or maternal line. It is likely that these autosomal DNA test-takers will share some percentage of DNA with Ernest: 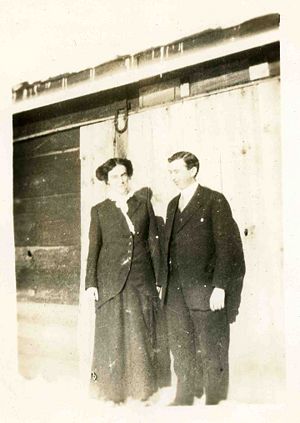 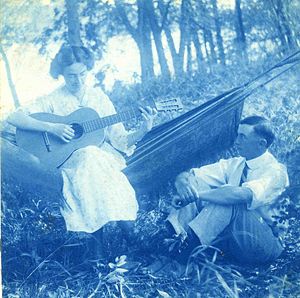 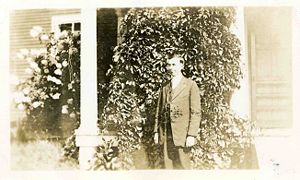 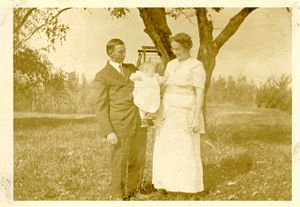 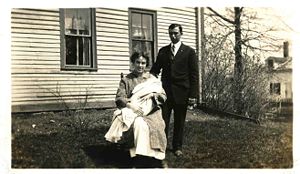 Dawn (Greenman) Walker
An ancestry.com cousin by dna shared this article about the Nelson boys wiht me: https://slate.com/news-and-politics/2015/05/nelson-archive-at-amherst-a-one-of-a-kind-trove-reveals-what-rural-19th-century-american-boyhood-was-really-like.html. Please read it. I can't wait to go back to MA and see the display of the items purchased at an estate sale!

Reading Cousin Bob's story above, makes me yearn for wanting to know Nanny and Grandfather even more! Even though I stayed with Nanny Nelson many times as a very young child, I just didn't have the opportunity to know her very well when she passed away. I know I was totally devastated as a 13 yr old girl. She was one of a kind! I don't remember Ernest as he died soon after I turned 1 yr old. I only have one picture of he and I.

Chris Whitten
That's great, Dawn! (I see that my friend Rick Pierpont posted a link to that article here back in 2015, but I don't remember reading it before.)

Usually it's a shame when things like this are sold at estate auctions or antique stores. You hate to see them separated from the family. But I can't imagine the items being shared more widely or respectfully than this.

I don't know if I told you, but, Hollis used to call me his little "Pocahontas". I don't know why. But he was such a sweet man! I loved when he came to the farm in Ashfield to visit the family.

Chris Whitten
Bob, thank you for adding this biography. It's really well written and engaging.
posted Jan 07, 2015 by Chris Whitten