Richard (Neville) de Neville was a member of aristocracy in the British Isles.

Richard Neville married Anne Beauchamp after 9 mar 1436 when their marriage contract was made.[1][2] They had these children:

Richard also had mistress(es) and they had children:

This page has been edited according to January 2014 Style Standards. See the Changes tab for descriptions of imported gedcoms. 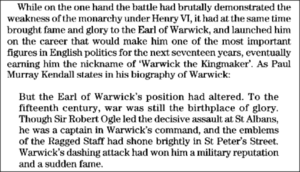 Richard is 20 degrees from Donald Howard, 14 degrees from Julia Howe and 5 degrees from Henry VIII of England on our single family tree. Login to find your connection.