Edy Newberry was born on January 8, 1742 in Groton, New London, Connecticut. He was the son of John Newberry, Jr. II and Zurviah Burch .

He married Ruth Burt, born July 3, 1747, in Bellvale, daughter of Daniel Burt, who was a prominent citizen of Orange County and representative in congress. Edy and Ruth had three children: Lydia, John, and Joel.

Edy, supposed to have been son of Benjamin Newbury, was among the original settlers of Orange county, New York. In 1775 he resided in Road District No. 5, in Warwick, and was assessed for taxes two pounds, seventeen shillings.

Is Edy your ancestor? Please don't go away!

ask our community of genealogists a question.
Sponsored Search by Ancestry.com
DNA Connections
It may be possible to confirm family relationships with Edy by comparing test results with other carriers of his Y-chromosome or his mother's mitochondrial DNA. However, there are no known yDNA or mtDNA test-takers in his direct paternal or maternal line. It is likely that these autosomal DNA test-takers will share some percentage of DNA with Edy: 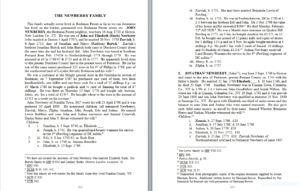