James Newby was a part of the Abolitionist Movement.

James R. Newby was born about 1843 in Connecticut. He was the son of abolitionists Fanny and Aaron Newby. His father was a freed slave. His parents established their home as a depot on the Underground Railroad.

At 11 years old, he became the first Black US Navy apprentice. He served on the Peruvian, USS Niagara and - after the war - the USS Wateree. During the Civil War, he answered the call and served with the famous 54th Massachusetts Volunteer Infantry. After the war, he returned for a time to the US Navy.

In 1850, he is attending school in or near New London, Connecticut.

A Sunday school was opened by Thomas P. Boss in New London, which he, his brother Lewis and two sisters attended.[1]

His parents' house became a "depot" of the Underground Railroad after they were married. Once his father departed to California during the Gold Rush, James stepped into a more active role in helping "passengers" make their way to Canada.[2]

James was the first Black Naval apprentice in the US Navy at 11 years old.

During the Civil War, he served as a Private in Company E of the 54th Massachusetts Volunteer Infantry, the first regiment in the United States made up entirely of enlisted men of color. He was about 19 years old, single and working as a seaman when he enlisted on 29 March 1863 from New London, Connecticut. Mustered out 20 August 1865 with his regiment.[3] 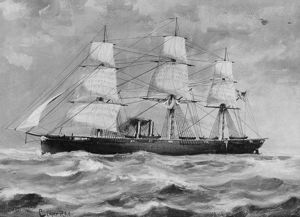 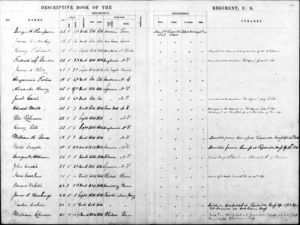 Leave a message for others who see this profile.
There are no comments yet.
Login to post a comment.
K Raymoure
The military record is a little confusing, but I think he appears as expected "James Newby" in the 1890 Veterans Schedules in Florence, New York. The record is almost illegible and definitely confusing ... Fireman is given as rank, which would've been his Naval rank before joining the 54th Massachusetts, but there's a clear "5" at the beginning of the regiment, and what follows looks like it could be a misspelled "Massachusetts" ... the dates don't make much sense either: 24 August 1864 - 24 July 1865.
posted Jul 20, 2018 by K Raymoure