Florence Nightingale was a celebrated English social reformer and statistician, and the founder of modern nursing. She came to prominence while serving as a nurse during the Crimean War, where she tended to wounded soldiers. She was known as The Lady with the Lamp after her habit of making rounds at night.

Florence Nightingale, daughter of William Edward Nightingale and Frances Coape Smith, was born on May 12, 1820 in the City of Florence in Italy.[1]

Florence's father, William Shore had changed his name to Nightingale, on inheriting the estate of Lea Hurst in Derbyshire from his maternal great-uncle, Peter Nightingale, in accordance with the terms of his relative’s will.

In 1837 Florence began to develop an interest in nursing, but her parents considered it to be a profession inappropriate to a woman of her class and background, and would not allow her to train as a nurse. Eventually in 1851 they relented. Florence went to Kaiserwerth in Germany for three months nursing training which enabled her in 1853, to become superintendent of a hospital for gentlewomen in Harley Street.[2]

The Crimean War began in 1854. Florence led a team of women to take over the management of the barrack hospital at Scutari where she observed the disastrous sanitary conditions. It was here whilst tending to the wounded soliders at night that she became known as the lady with the lamp.[3]

She is a 'ministering angel' without any exaggeration in these hospitals, and as her slender form glides quietly along each corridor, every poor fellow's face softens with gratitude at the sight of her. When all the medical officers have retired for the night and silence and darkness have settled down upon those miles of prostrate sick, she may be observed alone, with a little lamp in her hand, making her solitary rounds.[4]

In 1860 Florence opened a school of nursing at St Thomas' Hospital in London, which was the foundation for professional nursing. Once the nurses were trained, they were sent to hospitals all over Britain, where they introduced the ideas they had learned, and established nursing training on the Nightingale model.

Nightingale's theories, published in 'Notes on Nursing' (1860), were hugely influential and her concerns for sanitation, military health and hospital planning established practices which are still in existence today.

Florence settled in London and led the life of a retired invalid. She spent a great deal of time offering advice and encouragement both verbally and through her writing. She was also involved in establishing the East London Nursing Society (1868), the Workhouse Nursing Association and National Society for providing Trained Nurses for the Poor (1874) and the Queen's Jubilee Nursing Institute (1890).[5]

In 1883, Florence had been awarded the Royal Red Cross by Queen Victoria. In 1904 she was appointed a Lady of Grace of the Order of St John (LGStJ). She also received the Order of Merit in 1907 and in 1908 she was awarded the Freedom of the City of London. She had already received the German order of the Cross of Merit and the French gold medal of Secours aux Blessés Militaires. On 10 May 1910 she was presented with the badge of honour of the Norwegian Red Cross Society. [6]

It is self-evident from the foregoing that Florence had "endless energy, which became known as "Nightingale power". But what is less well known about her is that she was a deeply spiritual person who wrote several books on Christian mysticism. She is one of the best examples ... of awakened individuals who have pursued altruistic endeavors with incredible energy and determination."[7] Evelyn Underhill desribed her as "one of the greatest and most balanced contemplatives of the nineteenth century."[8] She herself wrote "Heaven is neither a place nor a time. There might be a Heaven not only here but now. Where shall I find God? In myself. That is the true Mystical Doctrine."[9]

Florence Nightingale died on August 13, 1910, aged 90, at her home in Park Lane, London.[10] She was buried on 20 August in the family plot at East Wellow, Hampshire. An offer of burial in Westminster Abbey was refused by her relatives.

The Coronavirus Pandemic and the NHS Nightingale Hospitals

On 24 March 2020 it was announced that a new hospital, named in honour of Florence Nightingale, was to be set up at the ExCeL conference centre in East London. Following an intensive joint effort by NHS clinicians and managers and military planners and engineers, the hospital would be ready for use from the following week. The Nightingale Hospital will provide support for thousands of patients with coronavirus, initially providing up to 500 beds equipped with ventilators and oxygen; but with the capacity to increase the number of available beds into the thousands.[11]

This will be a model of care never needed or seen before in this country, but our specialist doctors are in touch with their counterparts internationally who are also opening facilities like this, in response to the shared global pandemic.

Despite these amazing measures, the fact is no health service in the world will cope if coronavirus lets rip, which is why NHS staff are pleading with the public to follow medical advice – stay at home, stop the virus spreading, and save lives.[11]

In total 7 critical care Nightingale Hospitals were planned, 6 of which had been built as at 12 May 2020, the date of Florence Nightingale's bi-centenary. [12]

Thank you to Jane Nightingale for starting this profile. 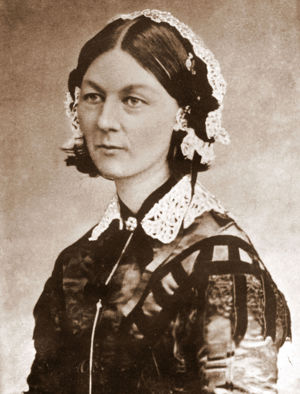 Florence Nightingale on the English £10 Note 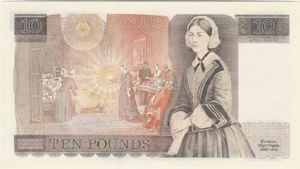 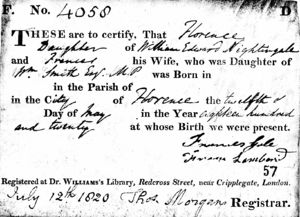 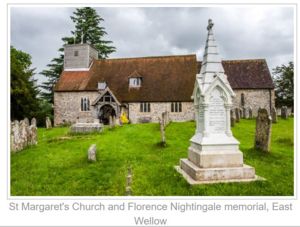 Carol Baldwin PhD, RN
Hi Sally, I took a pretty decent photo of a letter from Florence Nightingale to Queen Victoria during her time in Scutari when I toured Kensington in 2018. It was in Queen Victoria's in-box on her desk desk. I would be very please to provide this photo for Florence Nightingale's profile (from one nurse to another), particularly as we honor the 200th anniversary of her birth in this 2020 International Year of the Nurse. Let me know if you would like me to 'upload' the photo to her profile with all of the appropriate information (content of photo, date, location, photographer. Thank you, Carol Baldwin (Baldwin-3428). And so glad to see Barbie Dossey's work as references! She was one of my two sponsors to become a Fellow in the American Academy of Nursing in 2009. Barbie is a premier Nightingale scholar!
posted Mar 16, 2020 by Carol Baldwin PhD, RN

Sally (Rowe) Douglas
As a member of the England Project Managed Profiles Team, I am going to be doing some work on this profile.

Florence is 20 degrees from Laurie Giffin, 33 degrees from Toni Morrison and 16 degrees from Henry VIII of England on our single family tree. Login to find your connection.