Descendant of Thomas and Joan Mildenhall.

Edward Calvert Nixon was born on May 3, 1930 in in Los Angeles and was the youngest child of Francis Nixon and Hannah Milhous. He had 4 older brothers, including Richard Nixon who would one day become President of the United States.

He attended both Duke University and North Carolina State University, achieving degrees in Geology from both institutions.

He served in the United States Navy after college, from around 1954 through 1962.

In 1971, he became president of the consulting firm, Nixon World Enterprises, Inc. and remained in this position until his death in 2019.

He died on February 27, 2019 at a nursing home in Washington state. He was 88 years old at the time of his passing.

Is Edward your relative? Please don't go away! 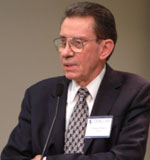 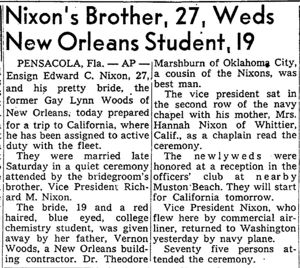 Edward is 39 degrees from Louis Braille, 20 degrees from Greta Moody and 16 degrees from Henry VIII of England on our single family tree. Login to find your connection.