Alfred Nobel was born in Stockholm, Sweden to impoverished parents. He was the son of Immanuel Nobel & Karolina Andriette (Ahlsell) Nobel. Despite his extreme poverty, Alfred had a keen interest in engineering, particularly explosives, learning the basic principles from his father at a young age. He owed this to being descended on his father's side from the Swedish scientist Olaus Rudbeck.

His scientific interest eventually paid dividends as he began to event marketable products such as plywood. This allowed him to study & collaborate abroad with his peers. Eventually, this led to a lucrative enterprise inventing & patenting dynamite & more powerful explosives.

Nobel Explosives plant The Ardeer peninsula was the site of a massive dynamite manufacturing plant built by Alfred Bernhard Nobel. Having scoured the country for a remote location to establish his explosive factory, Nobel finally acquired 100 acres (40 ha) from the Earl of Eglinton, and established the British Dynamite Factory in 1871, and went on to create what was described then as the largest explosives factory in the world. The factory had its own jetty on the River Garnock in Irvine Harbour serving ships disposing of time expired explosives or importing materials for the works.

At its peak, the site employed almost 13,000 workers in a fairly remote location and had its own railway station. The station was used solely for workers and those special visitors with business in the ICI plant, and was never a regular passenger stop. Until the mid-1960s, there were two trains per day to transport workers. Although the line no longer exists, the abandoned platform remains, hidden beneath dense undergrowth.

Alfred apparently did not want to be remembered as a "death dealer" who profited from the sale of explosives. In his will he set aside much of his considerable fortune for the awarding of prizes in the fields of physical science, chemistry, medical science or physiology, literary work "in an ideal direction" and to the person or society that renders the greatest service to the cause of international fraternity, in the suppression or reduction of standing armies, or in the establishment or furtherance of peace congresses.

Buried at Norra Begravningsplatsen in Stockholm at plot 4A 00170[1] 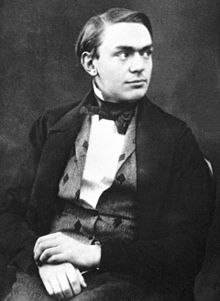 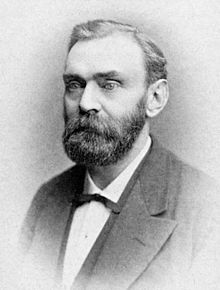 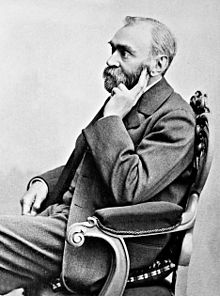 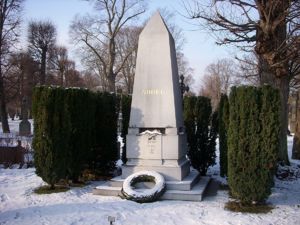 Alfred is 30 degrees from Claire Nava, 34 degrees from Levi Strauss and 21 degrees from Henry VIII of England on our single family tree. Login to find your connection.