Maud (Normandie) of England is a member of the House of Normandie.

Matilda was born in 1102, in Sutton Courtenay, Berkshire. She was the daughter of King Henry I of England and Eadgith Dunkeld of Scotland. Her paternal grandparents were William the Conquerer King of England, and Mathilde Flandre of England. Her maternal grandparents were Malcolm Dunkeld King of Scotland, and Margaret Wessex. She was the oldest legitimate child of King Henry I, the younger being her brother, William, Duke of Normandie.[1][2][3]

Her education in morals and letters, tempered with instruction in culture and religion began at an early age. The responsibility for Matilda and her brother William's spiritual care was appointed to Anselm, archbishop of Canterbury and former abbot of Bec.[1][4]

In 1109, when Matilda was about 7-years-old her father arranged her marriage to Henry V, Holy Roman Emperor and King of Germany. The marriage arrangements were devised by Archbishop Anslem. Her dowry was set at 10,000 marks of silver. She married the 32-year-old Henry V, on the 7th of January in 1114 at the age of twelve, in Worms. She was crowned Empress a second time in 1117 with her husband at St Peter’s Basilica, Rome. The Emperor died at Utrecht on 23 May 1125, leaving the young Empress a widow with no heir.[3][5][6][7]

On 25 November 1120, Matilda's brother William Ætheling drowned after leaving Barfleur, Normandy on his way back to England. William sailed aboard the White Ship. The prince supplied the crew and passengers with barrels of wine. They were all intoxicated upon leaving Normandy. The captain hit a rock in the English Channel and the ship sank. All passengers and crew aboard drowned except for one survivor. William had been King Henry I's heir and one of his two legitimate children, the other being Matilda. At a time when it was not common for a woman to rule, the King desired to have his own legitimate child succeed him. The King wanted to secure his successor and in 1126, he declared Matilda his heir. On 1 January 1127 King Henry had his court swear to support his daughter as his heir to England and Normandy.[1][5][8][9]

Her father was concerned with keeping his own royal lines Anglo-Saxon. The answer to protect his royal bloodline and join it with the Norman bloodline, thus keeping peace with Anjou was to betroth Matilda to Geoffrey d'Anjou in 1127. Geoffrey was the son of Fulk d'Anjou Count of Anjou, King of Jerusalem and Ermengarde d'Maine. King Henry I, knighted Geoffrey in Rouen on Whitsunday, 10 June 1128. A week later in Le Mans on 17 June 1128, Matilda married Geoffrey. Upon their marriage, Geoffrey's father turned over the county of Anjou to him.[1][3][5][6] At Man, Main, France in March of 1133, they had a son Henry Plantagenet the future King of England.[2][10][9]

Only a month after the death of Henry I in 1135, Stephen (his nephew and Matilda's cousin) rushed to take the throne, and be pronounced King. When Matilda's half-brother Robert, Earl of Gloucester, rebelled against Stephen, war broke out in 1136. Matilda arrived in England in 1139. After a series of battles Stephen was captured in February 1141 at the Battle of Lincoln. Her brother Robert was captured by Stephen's army.[11][12][13][14]

Lady of the English

During the summer of 1141, Matilda almost tasted success. With Stephen out of the way, she was now "Lady of the English." ... Only to turn around and blow it.

That June, she rode into London with a bad attitude ... demanding money. It incensed the public and her coronation was met with the angry town folk. She fled to Oxford without being crowned the Queen of England as her father had intended.[12][15]

Meanwhile... Stephen's wife hit the ground with an army from France. They caught the Earl of Gloucester, later ransomed in exchange for Stephen who had also been captured. Matilda escaped but her forces were routed at Winchester in September 1141. Thereafter she maintained a weak resistance out west.[12][16]

Stephen had his son, Eustace, crowned king while Stephen was still alive, but Eustace died in 1153. It was then decreed that Matilda's son, Henry II would inherit the throne after Stephen's death.[18][19][10]

In 1148, after the death of her half-brother, Matilda left her son (Henry II) behind and returned to Normandy. She died at Notre Dame du Pré near Rouen on 10 September 1169 and was buried in Fontevrault Abbey. Her remains were moved to Rouen Cathedral in 1847.[20][21]

Matilda's epitaph reads: "Great by Birth, Greater by Marriage, Greatest in her Offspring: Here lies Matilda, the daughter, wife, and mother of Henry."[12]

Sponsored Search by Ancestry.com
DNA
No known carriers of Maud's DNA have taken a DNA test. 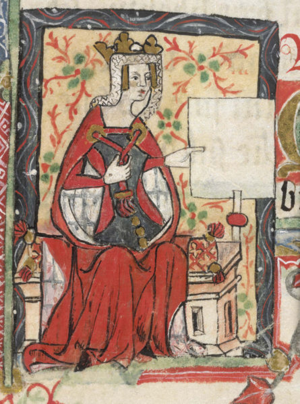 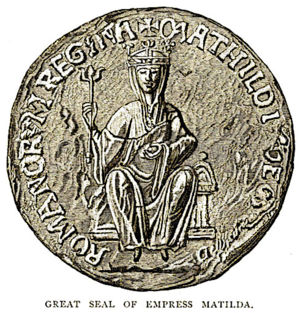 The Empress Matilda as a Subject for Biography

Contemporary manuscript image of Matilda, 'Lady (Queen) of the English' 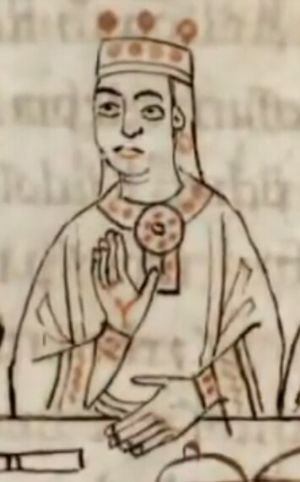 Laura DeSpain
Hello, Profile Managers, I plan to update Matilda's profile on behalf of the England Project Managed Profiles team. If you have any reliable sources please let me know.

John Atkinson
Thanks Laura for taking this on. Some suggestions for possible sources -

- Stewart Baldwin's profile for Matilda in The Henry Project https://fasg.org/projects/henryproject/data/matil002.htm

- Regesta regum anglo-normannorum 1066-1154, vol. 3 is many of her charters, but this is in Latin that might not be much use, but does have sections in the introduction in English including her administration & household https://archive.org/details/regestaregumangl03grea/page/n33/mode/2up also her itinerary starting on p. xliv

- I also own a book on Medieval Mothering, which has a chapter on 'The Empress Matilda and her sons' by Marjorie Chibnall, which I can have a look at and see if it has anything valuable. She seems to cite her own biography of Matilda a lot.

- The outline itinerary of Henry I, has some mention of Matilda https://archive.org/details/outlineitinerary00farruoft/page/171/mode/1up but you might have enough from other sources.

I came across this book that mentions Maud, and the other Plantagenets. I just hope it is useful here on her Profile. The annals of England: an epitome of English history, from co[n]temporary writers, the rolls of Parliament, and other public records by Flaherty, William Edward, d. 1878 https://archive.org/details/annalsofenglande01flah/page/236/mode/2up?q=The+Plantagenets

Jo Fitz-Henry
If you are related to Empress Maud, rather than post it here (where it will get archived), why not tell everybody about it in our

"How are you related to the Empress Maud, Lady of the English?" post on G2G?

Everyone on WikiTree can see it on G2G, and it's permanent so other cousins descended from Maud can find you in future.

You can also get a personalised sticker from the G2G post for your profile biography showing your relationship with Maud.