Hon. Beatrice O'Brien was born on 23 December 1882. She was the daughter of Edward Donough O'Brien, 14th Baron of Inchiquin and Hon. Ellen Harriet White.

Marconi presented a complex character. His manner was often cold and distant, yet he also displayed his mother's irreverent Irish sense of humour. Elegant in dress and bearing, also an accomplished piano player, he was charmed by women and they by him. Twice he had been engaged to rich Americans.

Their attraction could not compete with wireless, however, nor, to the last, could his father, who died in March 1904 in Bologna. Marconi was so pre-occupied he was unable to go to the funeral. On reaching the age of 30 soon afterwards, he remarked sadly: "A man cannot live on glory alone."

Within a year, he had fallen in love once more, and married the Honourable Beatrice-or 'Bea'-O'Brien, 19 year-old daughter of the late 13th Lord lnchiquin, an impoverished descendant of Brian Boru, warrior king of Ireland.

Her Anglican family initially disapproved of Marconi as a commoner and foreigner. In his favour, by contrast, he was not a practising Catholic and he charmed Bea's mother, who called him 'Marky'. The wedding duly took place on 16 March 1905 in the fashionable Mayfair church of St George's, Hanover Square, with crowds waiting outside.

He gave Bea two presents, a coronet of Brazilian diamonds and a bicycle, then curtailed their honeymoon at Dromoland, her family castle in County Clare, so that he could return to work. In the spring, he took her to Glace Bay, and left her there while he planned his next project - a transatlantic station at Clifden, on Ireland's west coast.

For Marconi, wireless still came first. The pattern was unchanged.

Is Beatrice your ancestor? Please don't go away!

ask our community of genealogists a question.
Sponsored Search by Ancestry.com
DNA
No known carriers of Beatrice's DNA have taken a DNA test. 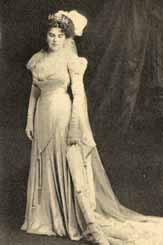