After many hard winters, the family sold out in 1843 and caught a riverboat at Kansas City. By this time, they would have had 2 children, Henry B. and William, born in Tennessee, and 4 children, G.W. Jr., Harrison, John, and Mary Ann, born in Missouri. The O’Neills, with their 6 children, traveled down the Missouri River by boat to St. Louis and then down the Mississippi River to where Arkansas, Louisiana, and Mississippi meet. There they purchased a wagon and joined a wagon train bound for Texas. It is believed that their original destination was the coastal region of Texas, but a breaking of a wagon wheel in Leesville, Gonzales County, TX, area delayed the wagon. By the time the repairs could be made, the family had decided to stay and had found a home in the community of Leesville. They had arrived in Texas in 1845, some 2 years after leaving Missouri. In addition, Mary was pregnant during part of the travels, which may have contributed to the family settling down in Leesville rather than pushing on to the Gulf coast. Their son Miles was born February 22, 1845.

The Civil War began on April 12, 1861. Six of George Washington’s 7 sons were Confederate soldiers – only Calvin was too young, age 11 at the beginning of the war. However, Harrison, after volunteering for the Sandies Home Guard with his brothers, stayed behind. It could be that Harrison stayed behind to take care of his brothers’ families and his parents’ endeavors at home. George Washington was about 51 at the time and did not volunteer for service. Also, Mary was about 54 with still one child, Calvin, at home.

OVERVIEW: 36th Cavalry Regiment [also called 32nd Regiment] completed its organization in Boston, Texas, late in 1863. It contained 823 men of which many were from Sulphur Springs and Belton, and Caldwell and Gonzales counties. The regiment was assigned to H. Bee's and Bagby's Brigade, Trans-Mississippi Department, and was involved in numerous engagements at Louisiana including Mansfield and Pleasant Hill. Later it moved to Galveston, Texas and there surrendered in June, 1865. The field officers were Colonel Peter C. Woods, Lieutenant Colonels Nat. Benton and W.O. Hutchison, and Major Stokely M. Holmes.

Campaigns and Battles of the 36th Texas Cavalry

Operations against Retreat from Alexandria to Morganza, Louisiana - May 13 - 20, 1864

posted 2 Jul 2015 by Kelly (O'Neill) Gottsponer   [thank Kelly]
Kelly (O'Neill) Gottsponer
The Civil War began on April 12, 1861. The Texas state legislature authorized volunteer military companies on February 15, 1858, but by the time the war started, the Texas Legislature passed an act requiring all “able-bodied men between the ages of 18 to 50, with certain exceptions, to enroll for defense and be subject to call of the Confederate Government”. One of the volunteer companies that organized in Gonzales County was the Sandies Home Guard. The Sandies Home Guard was organized June 22, 1861. Henry, at the age of 32, along with 5 of his brothers, William (28), George Washington Jr. (27), Harrison (25), John (22 or 23), and Miles (16), volunteered for the Sandies Home Guard. Their younger brother, Calvin, was only 11 at the time. The brothers are listed as privates under Captain Michael Erskine. The guard’s name probably came from Sandies Creek or Sandies Hill in Leesville, TX. Then, in 1862, all the brothers, except Harrison and Calvin, enlisted into the Confederate Army and served until the end of the war. George W., John, Miles, and William all served in the 36th Cavalry Company D. However, other sources list them serving in the Texas Mounted Riflemen, which later came to be known as Company D of the 32nd Regiment Texas Volunteer Cavalry. Although Harrison volunteered for the Sandies, he did not volunteer for the Confederate Army. It may be that he stayed behind to take care of the O’Neill families left behind and his parents, George Washington, Sr. and Mary who were in their 50’s with one child, Calvin, still at home. Henry was not on the roll with his brothers and there is no clear reason why this is. His company ended up being Company A, 4th Regiment of the Texas Cavalry C.S.A., and then that group formed a part of the Brigade of General Thomas Green in 1863.
posted 2 Jul 2015 by Kelly (O'Neill) Gottsponer   [thank Kelly]
Login to add a memory.
Is Miles your ancestor? Please don't go away!

ask our community of genealogists a question.
Sponsored Search by Ancestry.com
DNA Connections
It may be possible to confirm family relationships with Miles by comparing test results with other carriers of his Y-chromosome or his mother's mitochondrial DNA. However, there are no known yDNA or mtDNA test-takers in his direct paternal or maternal line. It is likely that these autosomal DNA test-takers will share some percentage of DNA with Miles:

Images: 1
Miles O'Neill - Letter from commanding officer recommending he be reinstated to company as soldier 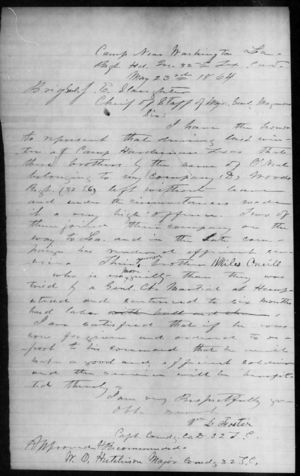