Henry and Amanda had one last child together, John Beasley, born January 17, 1873. Apparently the birth of this child resulted in her death, for on January 27, 1873, 10 days after John Beasley was born, Amanda died. Amanda was buried in the O’Neill Cemetery with her children, J.H, Alice, and Carrie, who preceded her in death. At the time of Amanda’s death, Henry would have been 44 years old with five children: George N. (17), James (10), Susan Lela (5), Mary Emma (2), and John Beasley (10 days old).

Eleven months after the death of his wife, Amanda, Henry married a third time to Sarah “Addie” Adeline Seale on November 29, 1873, in Gonzales County, TX. This date is documented at the Gonzales County Courthouse Annex in Gonzales County, however, Addie’s application for a widow’s pension lists their marriage date as December 3, 1873. Their names on the marriage license are Henry O’Neill and Ada Smiley.

The 1900 census of Kerr County, Texas lists Henry O’neill with wife Addie and children: Fannie, Henry B., Eva, John B; step-son Eli J. Smiley; and step-granddaughter, Beulah Smiley. Henry and Addie’s daughter, Eva Leah is said to have been born in Kerrville, Kerr Co., TX, in 1885 so it is assumed that sometime between 1880 and 1885 the O’Neill family moved from Leesville, Gonzales Co., TX, to Kerrville, Kerr Co., TX, although no one knows why. 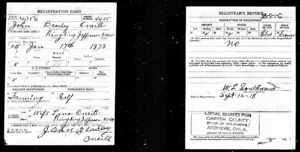