The 1900 census of Kerr County, Texas lists Henry O’neill with wife Addie and children: Fannie, Henry B., Eva, John B; step-son Eli J. Smiley; and step-granddaughter, Beulah Smiley. Henry and Addie’s daughter, Eva Leah is said to have been born in Kerrville, Kerr Co., TX, in 1885 so it is assumed that sometime between 1880 and 1885 the O’Neill family moved from Leesville, Gonzales Co., TX, to Kerrville, Kerr Co., TX, although no one knows why.

Is Eva your ancestor? Please don't go away!

ask our community of genealogists a question.
Sponsored Search by Ancestry.com
DNA Connections
It may be possible to confirm family relationships with Eva by comparing test results with other carriers of her mitochondrial DNA. However, there are no known mtDNA test-takers in her direct maternal line. It is likely that these autosomal DNA test-takers will share some percentage of DNA with Eva: 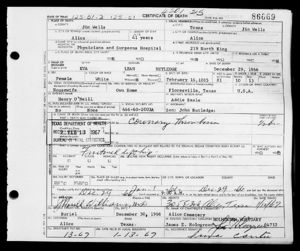