Maria Amalia of Wettin was a member of the aristocracy in Europe.

Maria Amalia of Saxony (Maria Amalia Christina Franziska Xaveria Flora Walburga; 24 November 1724 – 27 September 1760) was a princess from the House of Wettin, the daughter of Augustus III of Poland and the wife of Charles III of Spain; she was the Queen consort of Naples and Sicily from 1738 till 1759 and then Queen consort of Spain from 1759 until her death in 1760. The mother of thirteen children, she enjoyed a loving relationship with her husband. A popular consort, she oversaw the construction of the Caserta Palace outside Naples as well as various other projects in her husband's domains. Moving to Spain in 1759, she then set about the improvements to the Royal Palace of Madrid but died of tuberculosis before its completion. Maria Amalia was politically active and openly participated in state affairs in both Naples and Spain.

She was born at Dresden Castle in Dresden, the daughter of Augustus III of Poland, Elector of Saxony and Maria Josepha of Austria, herself daughter of Joseph I, Holy Roman Emperor. Her mother was the first cousin of Empress Maria Theresa. The infant was baptised with the names Maria Amalia Christina Franziska Xaveria Flora Walburga, but known as Maria Amalia. One of 15 children, she was the sister of Frederick Christian, Elector of Saxony, Maria Anna Sophia of Saxony wife of her cousin Maximilian III Joseph, Elector of Bavaria; she was the older sister of Princess Maria Josepha of Saxony who was the mother of Louis XVI of France. Her youngest sister, Princess Kunigunde was a possible wife for the future Philippe Égalité. She grew up at the court of Dresden and was educated in French, dance and painting.

In 1737 Maria Amalia became engaged to Charles, King of Naples and Sicily, the future Charles III of Spain. The marriage was arranged by her future mother-in-law Elizabeth Farnese, after Elizabeth had failed to arrange a marriage of Charles to Anna Maria of Austria, and refused to agree to have him marry to Louise Élisabeth of France. In December 1737, a papal dispensation was made. The marriage date was confirmed on October 31, 1737. On May 8, 1738, Maria Amalia had a proxy ceremony at Dresden with her brother, Frederick Christian of Saxony, representing Charles. Since this marriage was looked upon favorably by the papacy, it soothed the diplomatic disagreements between Charles and the Papal states.

In September 1760, a year after arriving in Madrid, Maria Amalia died from tuberculosis at the Buen Retiro Palace outside the capital. She was buried at the Royal Crypt in El Escorial. She was joined by her devoted husband in 1788.

Her descendants include today's King Juan Carlos I of Spain, Archduke Otto of Austria, Prince Henri, Count of Paris along with The Prince Napoléon as well as the two pretenders to the throne of the Kingdom of the Two Sicilies, Prince Carlo, Duke of Castro and the Infante Carlos, Duke of Calabria.[1]

Is Maria Amalia your ancestor? Please don't go away!

ask our community of genealogists a question.
Sponsored Search by Ancestry.com
DNA
No known carriers of Maria Amalia's DNA have taken a DNA test.

Images: 1
Portrait of Maria Amalia of Saxony as Queen of Naples overlooking the Neapolitan crown 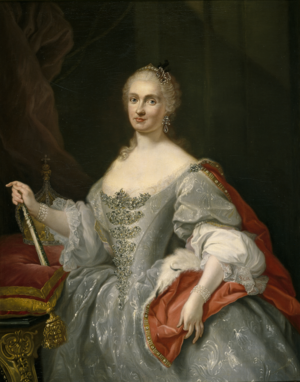 Maria Amalia is 21 degrees from Laurie Giffin, 32 degrees from Toni Morrison and 8 degrees from Henry VIII of England on our single family tree. Login to find your connection.