"The manor of Ogle was holden of the barons of Whalton by the service of one and half knight's fee of the old feoffment, and confirmed in the time of king Stephen or of Henry the Second, by Walter Fitz William, baron of Whalton, to Humphrey de Ogle, with whose descendants it continued till the time of queen Elizabeth, in which it fell to female heirs, and passed by marriage to the families of Cavendish and Hollis (Holles), dukes of Newcastle, and also from them by a female heir to Edward Harley, earl of Oxford and Mortimer, whose heiress married William Bentinck, second duke of Portland, whose son Wm Henry Cavendish Bentinck, the late duke of Portland, sold it, and the adjoining township for the sum of £185,000."[2]

ask our community of genealogists a question.
Sponsored Search by Ancestry.com
DNA Connections
It may be possible to confirm family relationships with Humphrey by comparing test results with other carriers of his Y-chromosome or his mother's mitochondrial DNA. Y-chromosome DNA test-takers in his direct paternal line on WikiTree: 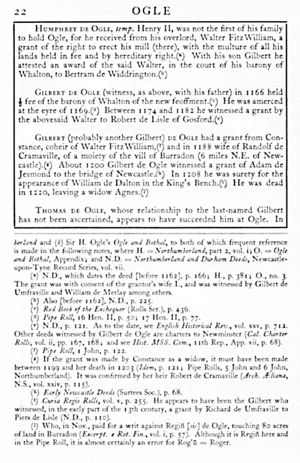 R.D. or Duane Franklin
Deed of William the Conqueror to

Humphrey De Ogle, of all liberties and royalties in his manor of Ogle.