William's sis. Margaret, and prob. his son Henry (ancestor of Ogles of Eglingham), married into leading families of co. Westmoreland). ...

but NOTABLY ... Sir Richard Musgrave and William of Choppington's father Sir Robert Ogle sided with the Manners family during Causa de Heron, a family feud during c. 1420s between the Manners and Heron families of co. Northumb. Maybe Richard had a close relative who married William's son, Henry Ogle of Choppington, ancestor of the Ogles of Eglingham.

connections to co. Lincs. via son Gawen's marriage to Wm. Bernaby's dau. ... Could William Ogle of Choppington been in contact w/ the Ogle of Pinchbeck, co. Lincs.? 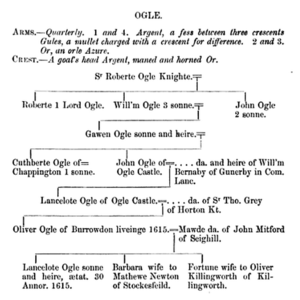