Jørgen and wife Anna produced 17 pregnancies, most of which did not bring about issue:

His marriage to Anne was arranged in the early 1680s with a view to developing an Anglo-Danish alliance to contain Dutch maritime power. As a result, George was unpopular with his Dutch brother-in-law William of Orange, who was married to Anne's elder sister, Mary. William and Mary became joint monarchs of Britain, with Anne as their heiress presumptive, in 1689 after the "Glorious Revolution" deposed James II and VII, the father of both Anne and Mary.

William excluded George from active military service, and neither George nor Anne wielded any great influence until after the deaths of William and Mary, when Anne became queen. During his wife's reign, George occasionally used his influence in support of his wife, even when privately disagreeing with her views. He had an easy-going manner and little interest in politics; his appointment as Lord High Admiral in 1702 was largely honorary.

By 1700, Anne had been pregnant at least seventeen times; twelve times, she miscarried or gave birth to stillborn children, and two of their five children born alive died within a day.[38] The only one of the couple's children to survive infancy—Prince William, Duke of Gloucester—died in July 1700 at the age of 11. With Gloucester's death, Anne was the only person in the line of succession to the throne, as established by the "Glorious Revolution". To extend the line and secure the Protestant succession, Parliament passed the Act of Settlement 1701, which designated William and Anne's nearest Protestant cousins, the House of Hanover, as the next in line after Anne.[39] 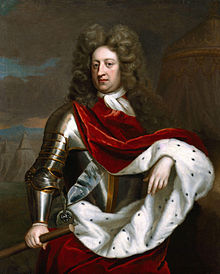 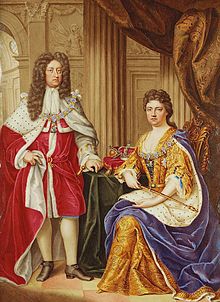