Christian IV Oldenburg was a member of the aristocracy in Europe.

KING OF DENMARK FROM 1588 TO 1648 eldest son of Frederick II and Sophie of Mecklenburg Gustrow.

King of Denmark and Norway

The son of Frederick II, king of Denmark-Norway, and Sofie of Mecklenburg-Schwerin, he was born at Frederiksborg castle in 1577.[1] He descended, through his mother's side, from king Hans of Denmark, thus uniting the senior branch' descent to the crown.[citation needed] He succeeded to the throne at the age of 11, on the death of his father on 4 April 1588. While he was still growing up, chancellor Niels Kaas and the Rigsraadet council served as trustees of theroyal power. He received a good education, and was a headstrong and talented student. At the age of 18, Christian ascended the throne on 17 August 1596. On 30 November 1597, he married Anne Catherine of Brandenburg, a daughter of Joachim Friedrich, margrave of Brandenburg and duke of Prussia. The queen died fourteen years later, after bearing Christian six children. Four years after her death the king privately wedded a handsome young gentlewoman, Kirsten Munk, by whom he had twelve children  a connection which was to be disastrous to Denmark.[1] It is believed that he, counting both legitimate and illegitimate, had at least 26 children.[citation needed](...)

When Christian was crowned king, Denmark held a supremacy over the Baltic Sea, which was lost Sweden during the years of his reign. Nevertheless, Christian attained a legacy of great popularity with the people, as one of the few Danish kings from the House of Oldenburg. As such, he featured in the Danish national play Elverhøj, and is one of the central figures in the Danish royal anthem Kong Kristian stod ved højen mast which details the Battle of Colberger Heide as a heroic Danish victory. Furthermore, his great building activities also furthered his popularity.(...)

Naturally cheerful and hospitable, he delighted in lively society; but he was also passionate, irritable and sensual. He had courage, a vivid sense of duty, an indefatigable love of work, and all the inquisitive zeal and inventive energy of a born reformer. His own pleasure, whether it took the form of love or ambition, was always his first consideration. In the heyday of his youth his high spirits and passion for adventure enabled him to surmount every obstacle with elan. Thepeerage: http://thepeerage.com/p10227.htm#i102269

From Wikipedia, the free encyclopedia Christian IV (12 April 1577  28 February 1648) was the king of Denmark and Norway from 1588 until his death. He is sometimes referred to as Christian Firtal in Denmark and Christian Kvart or Quart in Norway.

He descended, through his mother's side, from king Hans of Denmark, thus uniting the senior branch' descent to the crown.</p>

He is frequently remembered as one of the most remarkable Danish kings, having initiated many reforms and projects, and ruling for just under sixty years. (...)

Christian gained both in popularity and influence at home, and he hoped to increase his external power still further with the assistance of his sons-in-law, The last years of Christian's life were embittered by sordid differences with his sons-in-law, especially with Corfitz Ulfeldt. On 21 February 1648, at his earnest request, he was carried in a litter from Frederiksborg to his beloved Copenhagen, where he died a week later.[1] He was buried in Roskilde Cathedral....His own pleasure, whether it took the form of love or ambition, was always his first consideration. In the heyday of his youth his high spirits and passion for adventure enabled him to surmount every obstacle with elan. But in the decline of life he reaped the bitter fruits of his lack of self-control, and sank into the grave a weary and brokenhearted old man. [http://en.wikipedia.org/wiki/Christian_VIII_of_Denmark English

Is Christian IV your ancestor? Please don't go away!

ask our community of genealogists a question.
Sponsored Search by Ancestry.com
DNA Connections
It may be possible to confirm family relationships with Christian IV by comparing test results with other carriers of his Y-chromosome or his mother's mitochondrial DNA. Y-chromosome DNA test-takers in his direct paternal line on WikiTree: Mitochondrial DNA test-takers in the direct maternal line: 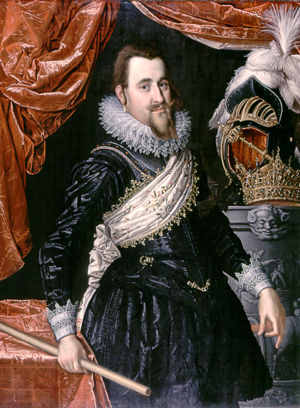 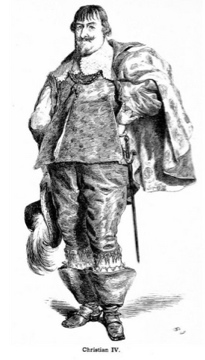