Frederik VI Oldenburg was a member of the aristocracy in Europe.

Frederick VI (Danish and Norwegian: Frederik; 28 January 1768 – 3 December 1839) was King of Denmark from 13 March 1808 to 3 December 1839 and King of Norway from 13 March 1808 to 7 February 1814. From 1784 until his accession, he served as regent during his father's mental illness and was referred to as the "Crown Prince Regent" (kronprinsregent). For his motto he chose God and the just cause (Danish: Gud og den retfærdige sag) and since the time of his reign, succeeding Danish monarchs have also chosen mottos in the Danish language rather than the formerly customary Latin. [1]

Is Frederik VI your ancestor? Please don't go away!

ask our community of genealogists a question.
Sponsored Search by Ancestry.com
DNA Connections
It may be possible to confirm family relationships with Frederik VI by comparing test results with other carriers of his Y-chromosome or his mother's mitochondrial DNA. Y-chromosome DNA test-takers in his direct paternal line on WikiTree: Mitochondrial DNA test-takers in the direct maternal line:

Images: 2
Frederick the Sixth of Denmark and Norway in coronation robes 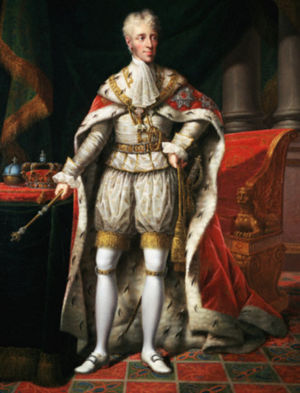 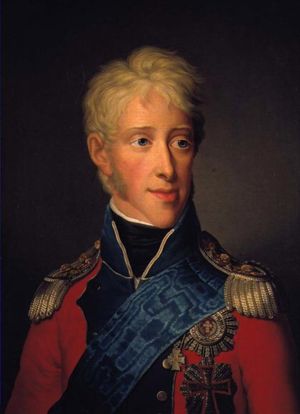 Steve Selbrede
The Ancestry source claims a mistress who is not listed in Wikipedia. This daughter, Ann Margrethe Dorothea was born in 1829. Does anyone know of a source for this mistress and child?
posted Sep 03, 2018 by Steve Selbrede

John Kingman
The parents' "confirmed with DNA" indicators were removed because the DNA confirmation is undocumented.

Please see this G2G article on DNA confirmation for more information and guidance on proper documentation.

Frederik VI is 24 degrees from Ludwig Kraayenbrink, 10 degrees from Henry VIII of England and 16 degrees from Ferdinand von Zeppelin on our single family tree. Login to find your connection.