Gwendolen was a Conservative politician in the United Kingdom, and, by marriage, a member of the Anglo-Irish Guinness brewing dynasty.

She was appointed Commander, Order of the British Empire (C.B.E.) in 1920.

Her husband was a Conservative Member of Parliament (MP) for Southend. In 1927, he ceased to be an MP when he succeeded to his father's earldom.

The Countess of Iveagh, as Gwendolen Guinness was now known, won the Southend by-election on 19 November 1927 to replace her husband as MP. She served until her retirement at the 1935 general election. When she retired she was succeeded as MP by her eldest daughter Honor Guinness's husband, Henry "Chips" Channon.

In 1956 she presented her Surrey childhood home, Clandon Park, to the National Trust.

Is Gwendolen your ancestor? Please don't go away!

ask our community of genealogists a question.
Sponsored Search by Ancestry.com
DNA
No known carriers of Gwendolen's DNA have taken a DNA test. 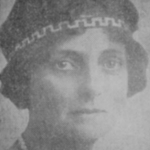