[10] Her dad, Greenberry Ott, was an established blacksmith of some reputation in Leavenworth, IN. Some years later his grandson Harry E. Yates (my Father) was to become a blacksmith also. I have always thought probably Dad learned his skills while spending time in Grandpa Ott's shop.

[11] James W. and Mary had eight children between the years of 1881 and 1899 and six of them lived to adulthood. James was a farmer but also did other work to make ends meet. According to my cousin, Betty Musso, he was a carpenter and for some years she owned a small desk with a lift up lid that he had made. According to cousin Ruth Landers he also worked on the railroad.

[12] It was a privilege two of my cousins and I had the summer of 1997 to visit the site of the Yates farm where this all took place. Wilbur W. Yates, Orville Sarles, and I were taken to the site by the owner Carl Grant. Carl's father had bought the Yates place while Carl was a boy at home yet. He showed us exactly where the original house stood. Then he showed us a place where a log cabin had stood where the family moved after Grandpa James Wilson died in a sort of effort to escape the germ. I can't describe the almost sacred feeling I had as we stood there where our parents had lived, played, laughed, and cried. I had heard my Aunt Goldie tell how she and her sisters discovered some love letters my Dad had received from a girl. She said Dad chased them all over those hills laughing and threatening. Some of them were older than he and apparently could still outrun him. Those thoughts from memory's lane came back to me.

[13] The first thing I can remember is when Grandma Yates went to town and left the boys at home on the farm. She came home to find they had stripped the bark off the fruit trees. She said, "Who told you boys to do that?" Mom always laughed when she told me that story. Of course I heard it many times.

[14]When the small pox epidemic hit the family Mom, Ruby, was three years old. They tied her hands to keep her from scratching her face and she would turn over and rub her face in her pillow. She was always conscious of the scars it had left but I don't think anyone else ever noticed.

[15]You probably know grandmother came from a wealthy family.

Grandpa Yates worked on the railroad and in about 1903 he came home to the farm with Small Pox, there he and one of the daughters died. Mom, (3 yrs) Ruby Eva also had small pox but survived. In those days people didn't understand how the disease was transferred, they were just panicked.

[16]After grandma had lost her husband and daughter she moved her other children to the much smaller farm house that was down over the hill from the large family home. One morning they woke up and discovered their large home had been burnt to the ground. So Mary Ellen was left to raise the children by herself.[17]

[18] I can remember her living with us for at various times in Indiana. My first memory of her was how she combed her hair, which hung down her back, into a bun and pinned it with large hair pins.

[19] Also she would keep orange peels in her dresser drawer and eat on them like candy; probably much better for her.

[20]She lived with us again when we lived outside Anderson, Indiana and I do have pictures of her fishing with us on the bank of a river. She wore an old-fashioned sunbonnet. Good memories of her!

No more info is currently available for Mary Ott. Can you add to her biography? 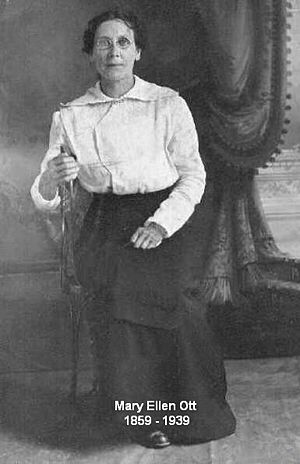