Owens was the youngest of ten children, three girls and seven boys, born to Henry Cleveland Owens and Mary Emma Fitzgerald in Oakville, Alabama on September 12, 1913.

Owens and Minnie Ruth Solomon met at Fairmount Junior High School in Cleveland when he was 15 years old and she was 13 years old. They dated steadily through high school. Ruth gave birth to their first daughter, Gloria, in 1932. They married on July 5, 1935 in Cuyahoga County, Ohio,[2] and had two more daughters together: Marlene, born in 1939, and Beverly, born in 1940.[3] They remained married until his death.

Owens, a pack-a-day cigarette smoker for 35 years, had been hospitalized with an extremely aggressive and drug-resistant type of lung cancer on and off beginning in December 1979. He died in Tucson, Arizona, on March 31, 1980, with his wife and other family members at his bedside. He is buried in Oak Woods Cemetery in Chicago.[4] 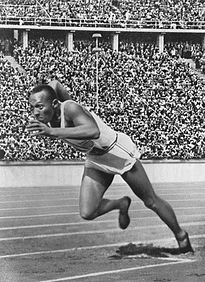 Lisa (Kelsey) Murphy
... showed them all. In the 4 events he took part, he took the gold. While standing on the winner platform, surrownded by the soldiers and swastikas, the crowd of 110,000 people quit chanting Hitler. It had changed to Jesse Owen's name. He was given a ticker tape parade when he got back to the U.S. He however, had to ride the freight elevator to get to the reception thrown for him at the Waldorf Astoria. He is quoted as saying "One chance is all you need".

Lisa (Kelsey) Murphy
In 1936 when he was in Berlin for the Olympics, the swastika banners were everywhere and Hitler assured everyone they would see the proof of "Aryan Superiority".

Jesse Owens' grandfater was a slave, his dad a sharecropper. He fought pnuemonia a lot. Even though many colleges fought over him, he was still not considered equal. He won highschool world records but Ohio State still would not offer him scholarships. He had to earn his way by working odd jobs to even eat. These jobs included, gas station attendant, waiter, night elevator operator, campus library worker. No one ever paid for anything for him. No one would even use his name for papers or announcing, he was called "the Negro Owens" and that he was "nonhuman". They all knew the Aryans were going to win, it was guaranteed. He ...