An article mentioning Owen's learning of saddlery in Richmond, Hawkesbury Herald, Friday 22 May 1903

Owen Oxley, of Mudgee, saddler. Liabilities, £1079 4s. 9d. Assets, £1010. Amount of deficiency, £69 4s. 9d. Offical assignee, Mr. F. W. Perry. Memo: I am compelled to sequestrate my estate in consequence of being heavily pressed by my creditors, there being seven notions against me, also being desirous that my creditors should be equally dealt with. -O. OXLEY.

Accidental Burning.-On Sunday last, Mrs. Oxley, Gladstone street, was standing before the fire, when her dress caught fire and immediately blazed up, enveloping her in flames. With the assistance of Miss Oxley, the fire was quickly extinguished, but not before Mrs. Oxley's right hand was severely burnt.-Mudgee Liberal, Feb. 19.

Mention in the Maitland Mercury & Hunter River General Advertiser of Tues, 3 Sep, 1867: Mr Owen Oxley, sadler, from Mudgee, has arrived amongst us (not before he was wanted), and commenced business.

This was one where the buildings were supplied by the Council of Education and which could only be used as a school. Those who wrote were Jethro White, Presbyterian storekeeper, Owen Oxley, a Wesleyan saddler and Patrick Fitzgerald, a Roman Catholic bootmaker. They agreed to raise £110 to go towards the cost of the building. They explained that there was 35 children eligible and that the nearest school was 50 miles away."

The weather is again hot, with occasional dry winds. On Saturday last a whirlwind passed over the town, unroofing the stables at the police barracks, also a dwelling-house and workshop of Mr. O. Oxleys, a saddler of this town. One of Mr. Oxley's sons had a narrow escape, some of the broken bark catching him as he most imprudently made a run from the house, throwing him down and inflicting injuries, but of a slight nature, about the face and mouth.

Is Owen your ancestor? Please don't go away!

ask our community of genealogists a question.
Sponsored Search by Ancestry.com
DNA Connections
It may be possible to confirm family relationships with Owen by comparing test results with other carriers of his Y-chromosome or his mother's mitochondrial DNA. However, there are no known yDNA or mtDNA test-takers in his direct paternal or maternal line. It is likely that these autosomal DNA test-takers will share DNA with Owen: 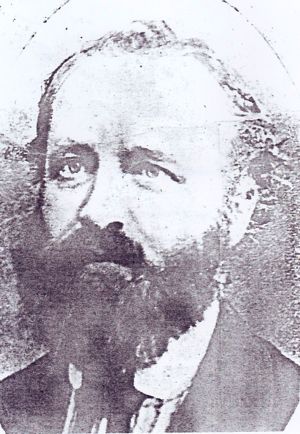