1891 Thomas is recorded in the 1891 census as living at 106 Dugga St, Peak Hill. Thomas was very active in Peak Hill. Many references in the "History of Peak Hill"

1899 The Sydney Morning Herald, Saturday 21 October 1899 The following new list of magistrates for the colony of New South Wales has been gazetted. .........T. D. Oxley

1902 Sold his General store (co-owned with his brother Samuel) to W. Tregaskis and W. M. Fitzgerald

The adjourned inquest on the body of William Tregaskis was continued this morning, before Mr. H. N. Gibson, J.P., coroner, and a jury of 12. Whilst the prisoner, Ah Chick, was being transferred from the cell to the court house, handcuffed, and in charge of the police, a man named Thomas Oxley struck him a violent blow on the mouth, causing the blood to flow. Water was brought for the prisoner to wash away the blood and rinse out his mouth. Afterwards, when questioned by the sergeant as to whether he had anything to say he pointed to his mouth. The sergeant told him to open his mouth, and when he did so one of his teeth fell out. His jaw was swollen, and there was blood on the floor of the dock beneath where the accused sat. Oxley was related to Mr, Tregaskis by marriage, and is a Justice of the peace. The sergeant informed Oxley that he would have to answer a charge of assault.

This afternoon Henry Tregaskis, son of deceased, was called as a witness. On entering the court he threw a large stone, which struck prisoner on the jaw. He had another stone in his pocket. A scuffle ensued, and there was much disorder, Eventually order was restored, and Henry Tregaskis was arrested and released on bail.

The Inquiry was not concluded.

March 1905: charged (along with Joseph Henry Tregaskis) with occasioning actual bodily harm to Ah Chick (convicted of murder of T D Oxleys relative William Tregaskis). Thomas and his brother-in-law were convicted and sentenced to one year gaol, which was suspended under the first offenders act.

1907 The SMH, Monday 23 September 1907: PEAK HILL, Saturday. T. D. Oxley has commenced operations at tho Monto Carlo Mino, near Mingelo, where rich gold was obtained a few years ago. The syndicate which recently purchased Paton's Mine at Tomingley now propose floating it as the Gold Hill Company, with a capital of £5000. Mr. H. N. Gibson has been appointed legal manager pro tem; and It is expected that the shares will be rapidly applied for.

1908 The SMH, Thursday 5 March 1908: T. D. Oxley's mine, Monte Carlo, at Mingelo, Is under offer to a syndicate, which will probably purchase and devolop the property.

1912 Court case, Thomas threatened by another re his cattle on their property (Queensland).

Images: 2
Thomas Oxley (back row, left side of photo) 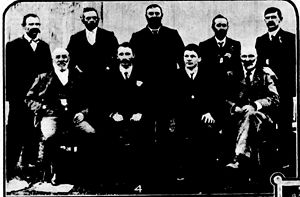 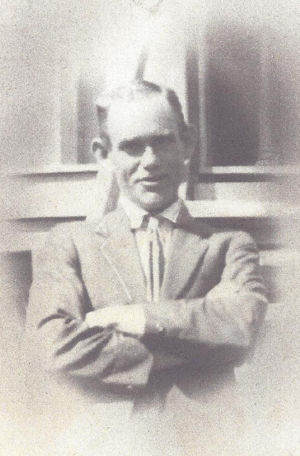 Thomas is 24 degrees from Mary McCauley, 23 degrees from B. W. J. Molier and 18 degrees from Henry VIII of England on our single family tree. Login to find your connection.