It is believed Wliiam was born about 1620. Based on the passenger list for the ship Planter, for his brother, Francis, William Pabodie was possibly born at St. Albans, Hertfordshire, England (as that is where the minister's certificate for Francis' oath of allegiance was from).[1] His father was John Pabodie, as proved by his will of 1649.[2][3] William's mother was possibly either Isabel Harper or Isabel Brittaine. These two profiles might represent the same person.

"Theis underwritten names are to be transported to New England, imbarqued in the Planter, Nic. Trarice, master, bound thither. The parties have brought certificate from the minister of Great St. Albans in Hertfordshire, and attestacon from the Justices of Peace according to the Lords' order."

It is presumed that the rest of the family immigrated around the same time, as his father, John, was listed as a freeman in Plymouth Colony in 1637.[5]

William Pabodie was a proprietor of Freetown, Bridgewater (Massachusetts) and Little Compton, Rhode Island. He was involved in many land transactions. William grew up in Duxbury with his father then took for himself various occupations: Yeoman (1648), boatman (1672), and planter, land surveyor. Served in General Court at Plymouth, through 1654-1663, and 1668-1682. Also a school teacher, William taught at Little Compton, as well as serving as secretary and record keeper of the first proprietors of Little Compton.[8]

Will of William Pabodie

In his will of 13 May 1707, William Pabodie of Little Compton, "for the settleing & Continueing peace in my family and amongst my Children after my Decease do order my estate in the world as followeth," to his wife (not named) all the housing and lands the part of in Little Compton called the "three quarters of a mile square," the east end of the house for the term of her widowhood, all household stuff except one set of green curtains already given to daughter "Lidea Greenil," all of the livestock, money and the bills; if she remarried she was only to receive her dower thirds. His only surviving son, William, had received some property by deed of gift and was to receive the whole of the housing and lands in Little Compton after his mother's death, as well as all of the books not otherwise disposed of. Grandsons Stephen Southworth, son of daughter Rebecah deceased, and William and John Pabodie, Sons of William, receved the one third of the land at "weskanauge westward of the town of Providence in Rhod Island...not as yet bound out nor Divided Namely one whole share I purchased of Philip Taber [in a deed dated 12 November 1685]," and two thirds of the land in the same area bought by son-in-law William "Foabs" from Shuball Painter on 8 March 1682 and then signed over to son-in-law Ichabod Wiswall and himself. The other two shares of the Taber land had been sold to sons-in-law Edward Southworth and William Fobes, and the other third of the Painter land was sold to Edward Southworth. Pabodie gave one shilling each to his "naturall" daughters (i.e. legitimate biological daughters as opposed to daughters-in-law) Mary, Mercey, Martha, Priscilla, Ruth, Sarah, Hannah, Lidia, the heirs of daughter Elizabeth, and the heirs of daughter Rebecah. The widow and son were named executors and the will was witnessed by John Woodman, Peter Taylor, and Samuel Willbore. Witnesses were sworn on 27 February 1707(18] and on that day bond was given by "m" Elizabeth Pabodie and her son william Pabodie.”[8][16]

The inventory of William's estate, taken on 30 December 1707, was valued at £407.14.00, most of which was the 70 acres of undescribed land valued at £315. The share of land at "washquanoug" was not valued. The will was recorded 1 March 1707[/8] and William Pabodie filed an executor's account on 7 September 1709 in which be lists legacies paid to "sisters" Mary, Mercey, Martha, Prissilla, Sarah, Ruth, Hannah, and Lidiah; to "the heirs of sister Elizabeth"; and to "husband of sister Rebecca".[16]

Sponsored Search by Ancestry.com
DNA Connections
It may be possible to confirm family relationships with William by comparing test results with other carriers of his Y-chromosome or his mother's mitochondrial DNA. However, there are no known yDNA or mtDNA test-takers in his direct paternal or maternal line. It is likely that these autosomal DNA test-takers will share some percentage of DNA with William: 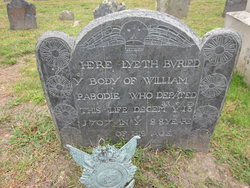 George Fulton
There is an inconsistency in this profile. It says he is born in Hertfordshire as well as in Plymouth.
posted Oct 02, 2020 by George Fulton

Robin Lee
Agree. the managing project has been the one to complete the merges. The sources, such as Yates, Rhode Island Vitals records, etc all disagree about his birth. I think a paragraph should be added to clarify that there is a lot of discussion, or provide primary sources.
posted Oct 05, 2020 by Robin Lee

Jillaine Smith
Did the post merge cleanup on behalf of PGM, including removing sources that don't meet project criteria for reliability. Since he was born prior to his parents' emigration, I removed reference to his Plymouth birth.

Please know that anyone with a pre-1700 badge could have done such cleanup and editing. I can only assume that Anne, when she completed the merge that had gone into default approval last year, hoped that the co profile managers would address the discrepancies.

Robin Lee
Pabodie-184 and Pabodie-1 appear to represent the same person because: based on dates and places and the family, this was intended to be the same person
posted Aug 30, 2016 by Robin Lee