Frank L. Packard was a Canadian novelist, short story writer and civil engineer with the Canadian Pacific Railway. Over his lifetime, he published more than 30 books, mostly crime fiction. His most popular novel was The Adventures of Jimmie Dale (1917), the first in the Gray Seal series.

Born in 1877 in Montréal, [1]he was the son of Lucius Henry Packard and Mary Frances Joslin. His mother died shortly after his birth. He graduated from McGill University in 1897 and took a post-graduate course at the Institut Montefiore at the Université de Liège, Belgium. He then worked as a civil engineer. His writing career began in 1906 with the publication of the first of the more than 150 stories and articles he wrote for American magazines.[2] By 1910 he gave his occupation as "author and editor."[3]

He died in 1942 in Lachine, Québec. He is commemorated by a plaque in the Writers' Chapel of the church he attended in Montreal, St. James the Apostle Anglican Church.[9] 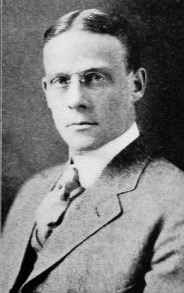