Earle Christmas Grafton Page was born in Grafton, New South Wales on 8 August 1880, fifth of eleven children of London-born Charles Page, blacksmith and coachbuilder, and his Tasmanian wife Mary Johanna Hadden, née Cox. Harold Hillis and Rodger Clarence George Page were brothers. Encouraged by his mother, Page excelled at Grafton Public School and won scholarships to Sydney Boys' High School and the University of Sydney (M.B., Ch.M., 1902). The money was essential as his father had landed himself in acute and lasting financial difficulties in the 1890s depression. Page entered university at 15 and after a year of arts enrolled in medicine and eventually topped the final year.

After working as a house surgeon at the Royal Prince Alfred Hospital he returned to Grafton in 1903, where he built up an extensive country practice and opened a progressive private hospital.

Page married Ethel Blunt in 1906, and they had five children. Page moved into different areas of business, buying a timber mill and dairy farms, and part-owned the Grafton Daily Examiner. He became a well-known figure in the Farmers and Settlers Association. In 1915 he founded the Northern NSW Separation League, which aimed to achieve separate statehood for the north-eastern region of NSW.

Earle Page enlisted as a surgeon with the Army Medical Corps in 1916 and spent 15 months working in military hospitals in Egypt, England and France. In 1918 he was elected mayor of South Grafton and set up the Nymboida hydro-electric scheme. He was elected to Federal Parliament in 1919 and became leader of the newly estab;ished Country Party in 1921.

Following the death of Joe Lyons in September 1939, he served 19 days as Prime Minister while the dominant United Australia Party chose a new leader, Robert Menzies. Page had been close to Lyons, but disliked Menzies, whom he charged publicly with having been disloyal to Lyons. Page refused to serve under him, and made an extraordinary personal attack on him in the House. His party rebelled and replaced him as leader. He returned to the Ministry the following year to assist the war effort.

He delivered Lewis Ellem into this world in 1915.

Sponsored Search by Ancestry.com
DNA
No known carriers of Earle's DNA have taken a DNA test. 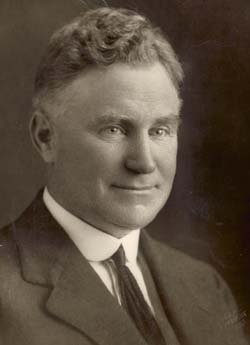 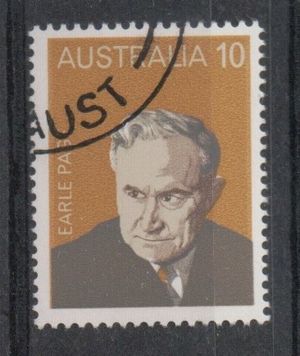 Earle is 25 degrees from Ludwig Kraayenbrink, 24 degrees from Henry VIII of England and 32 degrees from Ferdinand von Zeppelin on our single family tree. Login to find your connection.