Thomas Paine was a writer and revolutionary. He was born in Thetford, England, and lived and worked in Britain until age 37, when he immigrated to the British American colonies, in time to participate in the American Revolution.

Thomas Paine will be most remembered because of the pro independence editorial called Common Sense, published January 10. 1776. It expressed the ideas behind the American Revolution.

In a time when there were only two million free colonists living in America, 100,000 copies were sold in just three months! (In modern lingo, that’s New York Times bestseller material!) It was read by everyone who was anyone, including in later years, Abraham Lincoln and Thomas Edison.

The publication of this hugely popular pamphlet, along with other similar publications, would lead to his legacy as the Father of the American Revolution.

After the American Revolution ended, he moved back to England were he was outlawed for treason for defending the French Revolution. In 1792 he fled to France.

Thomas Paine didn't speak French, yet amazingly he was elected to the French National Convention in 1792. (Now that’s initiative!)

An "admirer" looking to return the remains to England later disinterred him however, and his final resting place is unknown.

Films and Books about Thomas Paine

[Anyone have thoughts on his final burial place?]

His Remains and Final Resting Place

Thomas Paine, the Founding Father famous for his pamphlet Common Sense, passed away a lonely alcoholic in 1809. Less than 10 people attended his funeral of the once famous Paine, who lost popularity for opposing the church. Next to broke at the end of his life, Paine was buried in a modest grave on his farm with all his burial requests ignored.

TPaine’s remains were stolen in 1819 by British radical newspaperman William Cobbett and shipped to England in order to give Paine a more worthy burial. Paine’s bones were discovered by customs inspectors in Liverpool, but allowed to pass through.

Cobbett claimed that his plan was to display Paine’s bones in order to raise money for a proper memorial. He also fashioned jewelry made with hair removed from Paine’s skull for fundraising purposes.

Cobbett spent some time in Newgate Prison and after briefly being displayed, Paine’s bones ended up in Cobbett’s cellar until he died. Estate auctioneers refused to sell human remains and the bones became hard to trace.

Rumors of the remains’ whereabouts sprouted up through the years with little or no validation, including an Australian businessman who claimed to purchase the skull in the 1990s.

In 2001, the city of New Rochelle launched an effort to gather the remains and give Paine a final resting place. The Thomas Paine National Historical Association in New Rochelle claims to have possession of brain fragments and locks of hair. Today, they say Paine's head lies in Australia and the rest of his body is at the four corners of the world.


Memories: 1
Enter a personal reminiscence or story.
Carolyn (Bobola) Murphy
The thing that sticks in my head about Thomas Paine, is that despite his genius regarding politics, his power and connections, that 100,000 people read his book... only six people attended his funeral ?
posted 13 Nov 2008 by Carolyn (Bobola) Murphy
Login to add a memory.
Sponsored Search by Ancestry.com
DNA
No known carriers of Thomas's DNA have taken a DNA test. 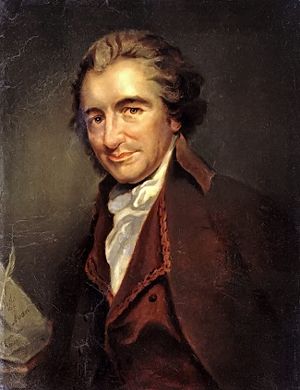 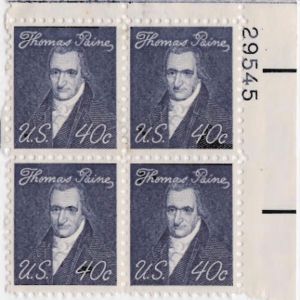 Geni shows that he had a daughter who died young.

Doug Lockwood
posted Nov 14, 2014 by Doug Lockwood
Paul Johnson
"Common Sense" was a pamphlet, but Paine did write several books. His last, "The Age of Reason", was a scathing criticism of ALL organized (or revealed) religions, as being only institutions of control over man. He used Christianity (most familiar to him) as his example, and the Bible itself, to disprove any Divine origin. Paine was not an atheist, but a Deist, believing God would not reveal himself to Man via anything as mutable as writing, but did so via nature and immutable natural laws. "The World is my Country, and to do good my religion." But on his final return to America, AofR was seen only as an "attack on Christianity", resulting in only 6 funeral attendees, 2 of which were freed slaves. Why? Read Paine's pamphlet "African Slavery in America" written 90 yrs < the Civil War.
posted Oct 25, 2009 by Paul Johnson