[children unknown]
Died 1705 at about age 70 in Oswestry, Shropshire, England

Although low of stature, unprepossessing in appearance, and of modest wealth, Palmer was accepted in marriage by the most beautiful nymphomaniac of her day, who, in consequence of a teen-age affair with the 2nd Earl of Chesterfield, required a complaisant or gullible husband. On the eve of the Restoration Charles II was told of his ‘gay wife, great expenses and slender fortune’, and, anxious to improve his acquaintance with the first of these handicaps, wrote to thank him for his signal services to the royalist cause, though it is not known what they were.

It seems unlikely that he was the father of any of his wife's numerous children.

Sir Roger was created Earl of Castlemaine then moved to Ireland with a grant of Castle Lackin plus significant land in Co. Mayo during 1684. [1]

Is Roger your ancestor? Please don't go away!

ask our community of genealogists a question.
Sponsored Search by Ancestry.com
DNA
No known carriers of Roger's ancestors' DNA have taken a DNA test. 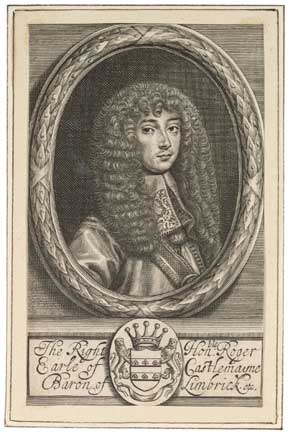