Susanna (Parker) Lawrence, wife of Major Samuel Lawrence of Groton, and the matriarch of the Lawrence family of that town, was born in 1755 to William Parker and Sarah (Boynton) Richardson Parker. Since there has been some confusion on other sites about her parents' past, it is worth including the following:

Sarah (Boynton) Richardson Parker Taylor, of Pepperell, Groton, and Concord, was born in 1721, and was the oldest child of Nathaniel and Hannah (Perham) Boynton of Westford. In succession, she married Abiel Richardson (b. 1720, d. 1753, notable b/c he was the subject of a case of mistaken identity which has since been resolved), William Parker, and finally David Taylor.

For more, please refer to the multiple works of Robert Means Lawrence and Samuel Abbott Green touching on the Lawrence family, as well as FindAGrave.

A brief note on a case of mistaken identity:

It has come to light that there are a handful of poorly researched trees up on a major genealogy platform that contend, incorrectly, that Susanna Parker (1755-1845), wife of Maj. Samuel Lawrence (1754-1827) of the Continental Army, was the daughter of William Parker (1727-72) and Sarah Foster (1721-) of Chelmsford. These trees have very few sources, and none that speak to her actual parents beyond their first names of “William” and “Sarah.” However, this is probably a simple matter of some well-intentioned person not being aware of the existing scholarship on Susanna (Parker) Lawrence, looking for a Susanna who was the daughter of a William Parker and a wife/ mother named Sarah, finding such a couple in Chelmsford, and posting it online as fact. Of course, once something goes up on the internet, it’s really, really hard to ever correct it.

However, we can actually prove that this particular William Parker and Sarah Foster are not Susanna (Parker) Lawrence’s parents. How? This couple had a daughter named Sarah, born 21 December 1755, in Chelmsford. [Source:Sarah Parker, "Massachusetts, Town Clerk, Vital and Town Records, 1626-2001” https://familysearch.org/ark:/61903/1:1:Q29L-YN1Y ].

Why does that matter?

And the Chelmsford records are clear, it was Sarah Parker, not Susanna, who was documented as being born to William Parker and Sarah Foster in the late fall of 1755.

Please help reduce the level of incorrect research surviving on the internet and do not link Susanna Parker, wife of Maj. Samuel Lawrence, to this couple.

Here is one of the key passages from the early 19th C genealogies of the Lawrence family to address Susanna (Parker) Lawrence's parents...

From: Historical sketches of some members of the Lawrence family. With an appendix by Lawrence, Robert Means, 1847-1935, p. 116. Published online in the Internet Archives.[3]

Was the eldest of three daughters of William and Sarah Parker, and was born in Groton Oct. 10, 1755. Her father's homestead was about half a mile west of the point where the " Red Bridge" spans the Nashua River. The house was situated just north of the town poor-farm, on the road leading to the latter from the West-Groton highway. Here were passed the days of her childhood. Her father, William Parker, died Feb. 1, 1761 ; and her mother married (July 23, 1767), for her third husband, David Taylor of Concord, and with her children made a new home in that town. The Taylor residence was in the "east quarter," so-called, about one mile from the centre, and near Meriam's corner, where a cross-road to Bedford diverges. As a result of interviews with several old residents of the neighborhood, the writer learned that the house occupied by the Taylors was taken down about 1830.

William Parker first married (March 30, 1736) Susanna Kemp of Groton, by whom he had six children. He married for his second wife (Jan. 9, 1755) Sarah Richardson of Pepperell. She was born in 1721, and was the oldest child of Nathaniel and Hannah (Perham) Boynton of Westford, and widow of Abiel Richardson.

The writer is indebted to Dr. S. A. Green [Samuel Abbot Green] for valuable memoranda relating to the parents of Susanna Parker."

Is Susannah your ancestor? Please don't go away!

ask our community of genealogists a question.
Sponsored Search by Ancestry.com
DNA Connections
It may be possible to confirm family relationships with Susannah by comparing test results with other carriers of her mitochondrial DNA. However, there are no known mtDNA test-takers in her direct maternal line. It is likely that these autosomal DNA test-takers will share some percentage of DNA with Susannah: 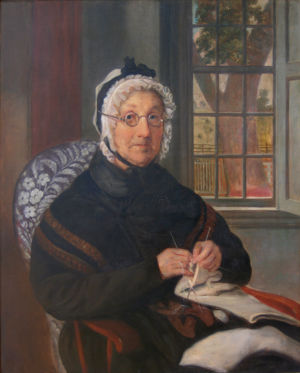