Bonnie Parker was a partner in crime with Clyde Barrow and others in their gang across the Dust Bowl area (Missouri, Texas, Oklahoma, Arkansas) of the United States during the Great Depression of the early 1930's.[1] They were known as "Bonnie & Clyde".[1] Their contradictory image as handsome, gun-toting, young lovers who robbed bankers and businesses during the Depression turned them into 20th century American counter-culture folk heroes.

Bonnie was considered a caring, model student[2] and wrote poetry as a teenager.

In September 1926, just before her 16th birthday, Bonnie married her high-school sweetheart, 17-year-old Roy Glenn Thornton.[1] Roy was a classic "bad boy" who had a record of minor crimes and was very-likely abusive to his young bride. Dropping out of school, 16-year old Bonnie took a job in Marco's Café to help support herself, since she could not count on her Roy.[4][1][2] He was finally sent to prison in January 1929, ending their time together.[1] Despite their rocky marriage and physical separation after just three years together, Bonnie wore her wedding ring and officially remained Mrs. Thornton until she died in May 1934.[1]

It is believed that Bonnie Parker met Clyde Barrow in West Dallas, Texas, in January 1930 while she was staying at a girlfriend's home to help out after the girl had broken her arm in an accident.[1] Apparently, Clyde Barrow dropped by this friend's home (the friend may have been Clyde's sister)[2] when Bonnie was in the kitchen making hot chocolate. [1] According to this source, it was "love at first sight," at least for young, unemployed, Bonnie Parker.[1][2][7][8]

With her husband serving time, there was nothing to stop the young lovers from being together, except Clyde's own petty crimes that led to his being sent to jail shortly after they met.[2] Bonnie reportedly helped smuggle a gun into the prison that he used to escape.[2] Clyde was caught and re-arrested. When he was finally released two years later, Bonnie decided to join him in a life of crime.[2] It was early 1932, in the middle of the Great Depression when bank-robbers were akin to "folk-heroes" to many poor Americans who were out of work and depending on bread lines and while bank foreclosures of family-farms created headlines.[2][1]

It is hard to imagine what drove an intelligent, literate young woman like Bonnie Parker into the sordid, often careless and senseless, crime spree that she and Clyde Barrow embarked on between January 1932 and May 1934. At the start at least, her criminal activities revolved around her passion for Clyde Barrow and a desire to help him achieve his oft-stated goal of forcing a massive jail-break at Texas' notorious Eastham Prison, where he had been abused during his first time behind bars.[1] Her misguided sense of justice led her deeper and deeper into Barrow's crazy schemes and his (and his buddies') often counter-productive shootings that rarely netted them much more than increasingly-negative notoriety. They certainly did not become wealthy from their crimes, nor did they emulate Robin Hood, taking from the rich and giving to the poor.

By the time their 15 month spree of small-town robberies, bank heists, and murders was brutally cut short by an ambush in rural Louisiana, Bonnie and Clyde and their gang of associates had killed over 18 people, including nine state or federal law enforcement officers.[1] Their final major "score" was the January 16, 1934, raid on Eastham Prison in Texas, where Clyde Barrow achieved his life's goal of embarrassing Texas prison officials by helping several key prisoners escape and securing "revenge" for his mistreatment there.[1]

That attack brought down the full weight of both the Texas and the federal government to stop Barrow, Parker, and their accomplices as soon as possible. One of the escapees they released, Henry Methvin, when later re-captured, turned on his rescuers, saving his life by revealing their whereabouts.[1] The brutal slaying by the gang of two young Texas Highway Patrolmen on Easter Sunday, 1934, turned public opinion against them, followed by the killing of an Oklahoma constable five days later.[1] For the first time, the "Dallas Journal" ran a large cartoon on its editorial page depicting an empty Electric Chair with the notice: "Clyde & Bonnie - Reserved."[4][9]

Clyde Barrow and Bonnie Elizabeth Parker were ambushed and killed on May 23, 1934, on a rural road in Bienville Parish, Louisiana.[10][2][1][3][11] The couple appeared that morning, driving a stolen Ford automobile, heading for Henry Methvin's parents' home, their agreed-upon rendezvous, not suspecting that Henry Methvin, caught the night before in Shreveport, had spilled their plans to the police in exchange for a life sentence instead of death.[1] Clyde slowed to talk with Henry's father, who had been planted on the rural roadside in his truck for just such an occasion.[1] It was about 9:15 AM. [1] Carnage ensued.

The two bandits were shot over 25 times each by a posse of four Texas officers: Frank Hamer, B.M. "Manny" Gault, Bob Alcorn, and Ted Hinton as well as two Louisiana officers: Henderson Jordan and Prentiss Morel Oakley. [1] The local coroner is said to have had problems embalming the corpses as they had sustained so many bullet holes, especially in the head and neck areas.[1] Thus ended the squalid, often senseless, multi-state crime spree of two of 20th century America's most-hated (and oddly-enough most-idolized), pair of criminals.

Eventually, Bonnie Parker's body was returned to Texas and she was buried in Crown Hill Memorial Park, Dallas, Texas.[5] "Virtual Flowers" have been banned from her on-line "Find A Grave" memorial due to repeated vandalism and/or inappropriate comments.[5] Bonnie contributed to her and Clyde's posthumous fame by writing a saga she called "Trail's End," about their two-year crime spree, that later became, "The Ballad of Bonnie & Clyde".[1]

Sponsored Search by Ancestry.com
DNA Connections
It may be possible to confirm family relationships with Bonnie by comparing test results with other carriers of her ancestors' mitochondrial DNA. However, there are no known mtDNA test-takers in her direct maternal line. It is likely that these autosomal DNA test-takers will share some percentage (beta) of DNA with Bonnie: 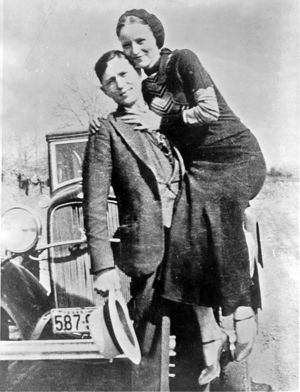 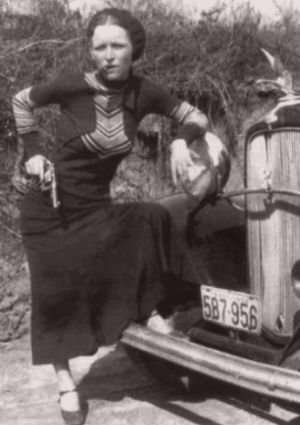 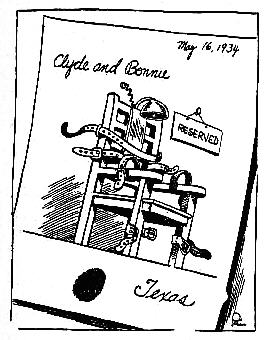 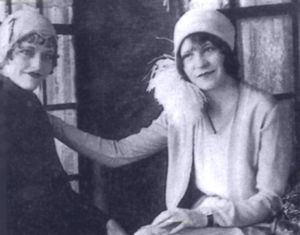 Leave a message for others who see this profile.
There are no comments yet.
Login to post a comment.
Lou (Harvey) Nelson
I cannot find any proof of my mother's people existing other her parents marriage bonds and a couple of census records. She was born a Parker and we are related to Bonnie as cousins. She even stayed with my grandparents a few times in Arkansas when laying low. Nine years ago my daughter was showing these very same pictures on the computer to her ex-sister-in-law,when my granddaughter came in and asked "Why is Granny wearing a hat?". She didn't question the cigar or gun just the hat. LOL I don't go around toting a gun or smoking cigars either, but all she was concerned with was the hat, hahaha. Anyone that can help me find more of Bonnie's people or George Thomas Parker's, the help would be greatly appreciated.
posted May 04, 2020 by Lou (Harvey) Nelson
Renee (McCourt) Anonymous
Awesome read! Thank you guys!
posted May 02, 2019 by Renee (McCourt) Anonymous

Gayle (Bennett) Donato
Well, looks like we all have skeletons in the closet . LOL looks like I'm 20 degrees from her. Interesting..very interesting.
posted May 28, 2017 by Gayle (Bennett) Donato
Renee Patterson
I live in the neighboring parish of Red River and I teach in Bienville. If I can be of any help, let me know. There is a historical marker near where they were killed.
posted May 24, 2017 by Renee Patterson
[Living McClenaghan]
Proud to be related to this woman.
posted May 24, 2017 by [Living McClenaghan]

Sally Stovall
All of you who participated in the Collaboration of this proflle did a wonderful job. Thank you.
posted Jul 05, 2015 by Sally Stovall
Griveau Alexis
I didn't now this personn before to read this biography. What a life she had !!!
posted Jun 26, 2015 by Griveau Alexis

Terry Wright
Hello Jessica I wonder if you could open this profile so we can add info to the bio and the Black Sheep template thank you Terry
posted Feb 28, 2015 by Terry Wright