Charles Stewart Parnell was born in County Wicklow, the third son and seventh child of John Henry Parnell (1811–1859), a wealthy Anglo-Irish landowner, and his American wife Delia Tudor Stewart (1816–1898) of Bordentown, New Jersey, daughter of the American naval hero, Admiral Charles Stewart (the stepson of one of George Washington's bodyguards). There were eleven children in all: five boys and six girls. Admiral Stewart's mother, Parnell's great-grandmother, belonged to the Tudor family, so Parnell had a distant relationship with the British Royal Family. John Henry Parnell himself was a cousin of one of Ireland's leading aristocrats, Viscount Powerscourt, and also the grandson of a Chancellor of the Exchequer in Grattan's Parliament, Sir John Parnell, who lost office in 1799 when he opposed the Act of Union.

The Parnells of Avondale[1] were descended from a Protestant English merchant family, which came to prominence in Congleton, Cheshire, early in the 17th century where as Baron Congleton two generations held the office of Mayor of Congleton before moving to Ireland. The family produced a number of notable figures, including Thomas Parnell (1679–1718), the Irish poet and Henry Parnell, 1st Baron Congleton (1776–1842) the Irish politician. Parnell's grandfather William Parnell (1780–1821), who inherited the Avondale Estate in 1795, was a liberal Irish MP for Wicklow from 1817–1820. Thus, from birth, Charles Stewart Parnell possessed an extraordinary number of links to many elements of society; he was linked to the old Irish Parliamentary tradition via his great-grandfather and grandfather, to the American War of Independence via his grandfather, to the War of 1812 (where his grandfather had been awarded a gold medal by the United States Congress for gallantry); he was connected with the aristocracy through the Powerscourts.

He died in his home at 10 Walsingham Terrace, Hove (now replaced by Dorset Court, Kingsway) on 6 October 1891 of pneumonia and in the arms of his wife Katharine (formerly Katharine O'Shea).[4] He was 45 years of age. Though an Anglican, his funeral on 11 October was at the Irish National nondenominational Glasnevin Cemetery in Dublin, and was attended by more than 200,000 people.[2][3]

In 1914, John Howard Parnell wrote a memoir about his more famous brother that gives a much more personal side of the man. Most only knew of Charles as the determined, and sometimes controversial, politician.[5]

Also in 1914, his widow Katherine (Kitty) wrote her own, very personal take on his life.[6] 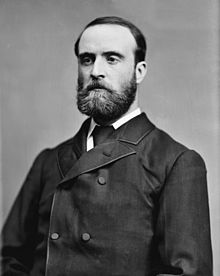 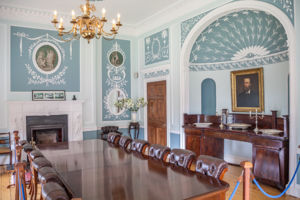 The Cause of Ireland poster 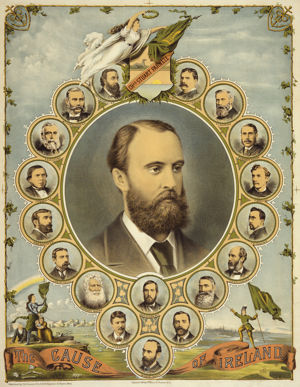 Leave a message for others who see this profile.
There are no comments yet.
Login to post a comment.
Kirk Hess
Parnell-497 and Parnell-433 appear to represent the same person because: See https://en.wikipedia.org/wiki/Charles_Stewart_Parnell; Parnell-433 is a much more fleshed out profile than Parnell-497
posted Jan 19, 2016 by Kirk Hess