Deborah Partridge was born in 1662 in Medfield, Massachusetts Bay, the daughter of John and Magdalene (Bullard) Partridge. She married John Adams, the son of Lt. Edward and Lydia (Penniman) Adams in Medfield on April 4, 1682. Some family histories[1]have her death date as around 1750, but Cutter has her death as occurring before 1695, when John married Susannah Breck.

Is Deborah your ancestor? Please don't go away!

ask our community of genealogists a question.
Sponsored Search by Ancestry.com
DNA Connections
It may be possible to confirm family relationships with Deborah by comparing test results with other carriers of her mitochondrial DNA. However, there are no known mtDNA test-takers in her direct maternal line. It is likely that these autosomal DNA test-takers will share some percentage of DNA with Deborah: 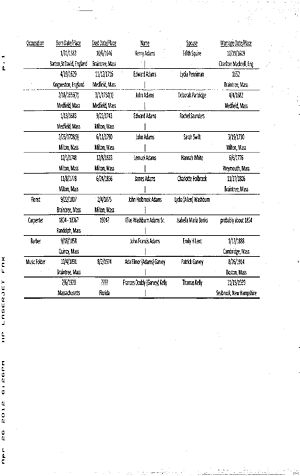