Louis Pasteur (/lwi pastœʁ/; December 27, 1822 – September 28, 1895) was a French chemist and microbiologist renowned for his discoveries of the principles of vaccination, microbial fermentation and pasteurization. He created the first vaccines for rabies and anthrax. His medical discoveries provided direct support for the germ theory of disease and its application in clinical medicine. He is best known to the general public for his invention of the technique of treating milk and wine to stop bacterial contamination, a process now called pasteurization. He is regarded as one of the three main founders of bacteriology, and is popularly known as the "father of microbiology".

Louis Pasteur was born on December 27, 1822, in Dole, Jura, France, to a Catholic family of a poor tanner. He was the third child of Jean-Joseph Pasteur and Jeanne-Etiennette Roqui. He met and courted Marie Laurent at the University of Strasbourg, daughter of the university's rector. They were married on May 29, 1849, and together had five children, only two of whom survived to adulthood; the other three died of typhoid. These personal tragedies were his motivations for curing infectious diseases.

Pasteur was frequently struck by strokes since 1868, and the one in 1894 severely impaired his health. Failing to fully recover from the shock, he died in 1895, near Paris. He was given a state funeral and was buried in the Cathedral of Notre Dame, but his remains were re-interred in a crypt in the Pasteur Institute in Paris, where the crypt is engraved with his life-saving works. 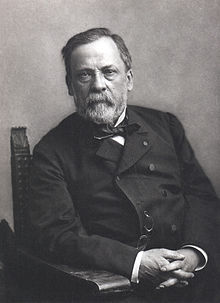 We are featuring Louis as the Example Profile of the Week in the Connection Finder on April 28, with the theme of medical innovators. Between now and then is a good time to take a look at the sources and biography to see if there are updates and improvements that need made, especially those that will bring it up to WikiTree Style Guide standards. We know it's short notice, so don't fret too much. Just do what you can. A Team member will check on the profile the day before the Connection Finder is updated and make last minute style-guide changes as necessary.