William Paterson was a soldier, explorer, botanist and lieutenant-governor. He is arguably best known as the commanding officer of the New South Wales Corps and founder of Launceston, Tasmania.

As a boy he became keenly interested in botany and in 1777, through the patronage of Lady Strathmore, he was enabled to visit South Africa. He made four journeys into the interior; after he returned in 1780 he prepared an account of his experiences, entitled Narrative of Four Journeys into the Country of the Hottentots and Caffraria, which he published and dedicated to Sir Joseph Banks in 1789.[1]

In 1781 Paterson became an Ensign in the 98th Regiment, with which he served in India. Whilst there, he wrote to Banks about specimens from the island of Johanna and his hopes of further finds on the Malabar coast. In 1783 he took part in the siege of Carour (Karur) and was promoted Lieutenant. After the regiment was disbanded in 1785, he returned to England and in 1787 was transferred to the 73rd Regiment. In June 1789 he was gazetted Captain in the New South Wales Corps, probably owing his appointment to Banks.[1]

After spending some months recruiting he sailed for Sydney aboard the Admiral Barrington, accompanied by Elizabeth, and arrived in October 1791. He was immediately given command of the detachment on Norfolk Island, where he served from November 1791 until March 1793. While there, he collected and sent home botanical, geological and insect specimens for Banks, and in 1794 discussed with him the publication of his memoranda on the natural history of Norfolk Island. In September 1793, based back at Sydney, he led an expedition to find a route through the Blue Mountains; although unsuccessful, he named the Grose River and discovered several plants new to Europeans. He became second-in-command of the New South Wales Corps at that time, and when Major Francis Grose left the colony in December 1794 Paterson acted as administrator until Governor John Hunter arrived nine months later. During this term he granted 4,965 acres (2,009 ha) of land and made no attempt, either then or after Hunter assumed office, to check or to control the trading and farming activities of his officers or the propensity of the troops under his command to take the law into their hands when they felt aggrieved. In 1795 he was promoted to Major and the next year went home on sick leave.[1]

While in England he advised Banks on plants and trees for the colony and in 1798 was gazetted Lieutenant Colonel and elected Fellow of the Royal Society. In March 1799 he was ordered to return to Sydney, with specific instructions to investigate the officers' trading in spirits, to check this practice and so to restore the 'sullied' credit of the British officer.[1]

After his return, he was appointed lieutenant-governor. Elizabeth once again took a prominent part in the life of the colony, helping to found the Orphans' School in 1800 and serving on the committee of the Female Orphans' Institution. The Patersons adopted a ten year-old girl from the orphanage in 1804. A quarrel with one of his officers, John Macarthur, resulted in his being wounded in the shoulder during a duel! Macarthur was sent to England for court martial. Paterson kept up his scientific interests, collecting plants from the Hawkesbury and exploring the Hunter River, but his health steadily deteriorated and during the first half of 1803 he had to be relieved of his duties. In May 1804 instructions were received from London that a new settlement should be founded at Port Dalrymple in Van Diemen's Land (Launceston, Tasmania) and that Paterson should be put in charge of it. Paterson sailed from Sydney in October with a detachment of soldiers and seventy-five convicts to found this outpost. He showed a keen eye for the natural resources of the island, and as usual, sent specimens to Banks. Elizabeth and their daughter, also Elizabeth, joined him in 1805.[1]

In February 1808 he received news from Major George Johnston, the officer commanding in Sydney, that Governor William Bligh had been arrested. Although insisting on his right to office as lieutenant-governor, he used the excuse of his poor health to postpone his departure for Sydney. He finally left Port Dalrymple on 1st January 1809 and 'assumed office' in Sydney nine days later; retiring to reside at (Old) Government House, Parramatta. He refused to reinstate Bligh when pressed by him to do so, but he insisted that Bligh, Johnston and Macarthur should return to England.[1]

After Macquarie arrived, Paterson and Elizabeth sailed with the disgraced New South Wales Corps in the Dromedary on 12th May 1810, but died at sea off Cape Horn on 21st June. In 1814, Paterson's widow married the widowered Francis Grose.[1]

Science was Paterson's chief interest. As a member of the Royal Society, he met many of the leading scientists of the day during his sojourns in England, and his botanical collections are preserved in the Natural History Museum at South Kensington. He introduced several types of fruit into the colony, including a peach which did very well, and as early as 1794 he started a six-acre (2.4 ha) garden. Later he experimented with imported plants and trees on his 100-acre (40 ha) estate at Petersham, now a Sydney suburb. Unlike most of his colleagues Paterson neither participated in trading nor enriched himself while serving in the settlement, and he died a poor man.[1] 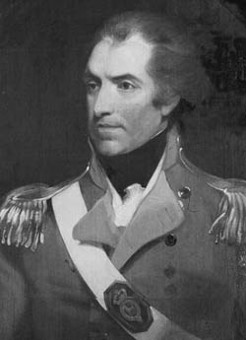