Hannah Patterson was a part of the Suffragette Movement.

Hannah Jane Patterson was a pioneer advocate of women's suffrage and a dominant figure in the feminist movement. She was a significant factor in getting both party platforms to endorse suffrage by state action.

Hannah Jane Patterson, daughter of John Patterson and Harriet McKune was born on November 5, 1879 at Smithton in Pennsylvania.[1]

Hannah graduated from Wilson College in 1901 and later on, became a member of the institutions board of trustees and the only woman member of its finance committee. She attended the University of Pennsylvania Law School and in later years Columbia University, where she studied finance. With this background she used her skills to become director of the West Newton bank where her father had served as president.[2]

Shortly after graduating from Wilson, Hannah took up the fight for women's suffrage. At first her attention was on local women's suffrage but in 1912 Hannah became state chairman of the Women's Suffrage Party of Pennsylvania. A post she held until 1915. In 1916 she became correspondence secretary for the National American Women's Suffrage Association.[3]

World war one started and women's suffrage movements where temporarily put on hold. During which time Hannah became a director of the Women's Committee for National Defense. For her work in this post she received the Distinguished Service Medal. Only 12 women were ever awarded with the DSM. [4]

The President of the United States of America, authorized by Act of Congress, July 9, 1918, takes pleasure in presenting the Army Distinguished Service Medal to Hannah J. Patterson, a United States Civilian, for exceptionally meritorious and distinguished services to the Government of the United States, in a duty of great responsibility during World War I. Hannah Paterson devoted herself through the whole period of the war to executive work of the Women's Committee of the Council of National Defense, devoting herself with great ability and energy to the organization of the activities and interests of the women throughout the United States in the interest of the successful prosecution of the war and, by her efforts, contributed to the splendid cooperation on the part of the women of the country in the great national emergency.

Hannah Patterson had devoted much of her younger life to women's suffrage. When the 19th Amendment was added to the Constitution in 1920 and women had won their voting rights, Hannah decided to move on a different career path.

Hannah Patterson died on August 21, 1937 at Pittsburgh, Pennsylvania. She was buried on August 23, 1937 at West Newton Cemetery, Westmoreland County, PA.[6]

ask our community of genealogists a question.
Sponsored Search by Ancestry.com
DNA
No known carriers of Hannah's ancestors' DNA have taken a DNA test. 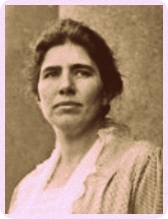 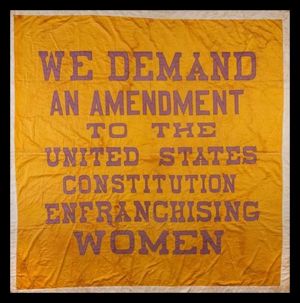