The In the 1900 federal census gives his birth year explicitly as 1820. This was followed by other censuses both earlier and later. However, the deposition given below suggests that 1823 is more accurate. He had a penchant for presenting himself as older than he was. At his death he was claiming to be 103 years old, and by the time his tombstone had been carved, his age had reached 108 years! (Find a Grave)

His French name, "Alexis," by which he is known in early records, is more commonly a woman's name in the English speaking world. Since "Alex" is a nickname for "Alexis," Payer changed his name formally to "Alexander," but went by the name "Alex," even in census records.

The siblings of Therese were: "Benjamin, James, Simeon, and Phelise Lecliyer, Julia and Antoine Grignon, and Alexis Peyet." (Kappler)

On 5 Oct. 1838, Benjamin L'Ecuyer and Francis Roy testified before a commission stating, "that they are well acquainted with Alexis Payon or Payer, residing at Prairie du Chien, and aged about twelve or fourteen Years. He is the Son of Michael Payon or Payer, and Mau. naw. tee. see a Winnebago Woman of full blood: the said Michael and Mau. naw. tee. see. resided for several Years after their marriage on Prairie du Chien, after which the said Michael emigrated to the West with some Indians, and has remained there ever since, and will so continue to reside, as deponents verily believe: Since his departure the said Michael has contributed nothing to the support of his Wife and said Child, which these deponents know from being nearly related to said Mau. naw. tee. see. and on habits of close intimacy with her: the said Alexis is an intelligent boy, well conducted and of good habits, he is naturally very smart, and if educated would make a good citizen, and intelligent person of business, but his education has heretofore been necessarily neglected from want of means." (Waggoner, 6-7)

He married Sarah Ann Rasdall, a.k.a., Rogue. She consistently lied about her age on the censuses, claiming that she was nine years older than she actually was. This was for a good reason: Alex married her when she was 12 years old, perhaps for her protection.

Gatschet, writing some notes about prospective informants in 1889, said, "Mrs. John Johnson, lives towards the Bluffs, speaks English & can tell a good deal. Alek. Pare [Alex Payer ?], her father, a policeman, speaks English." Mrs. Johnson, assuming Alex had no other children than those listed here, ought to have been Louise, who would have been 32 at the time.

An affidavit from 1838 states, "the said Alexis is an intelligent boy, well conducted and of good habits, he is naturally very smart, and if educated would make a good citizen ..." (Waggoner, 7a)

In 1865, when he lived with his wife in Minnesota, he was an interpreter for the United States government. He may have functioned in this capacity on and off for a number of years. He may be seen here standing in the back row in the photograph by R. A. Lewis taken in New York in 1865.

In the Treaty of 1829, Alexis was given one section of land in Rockford, Illinois. The same was granted to his mother and each of his siblings. (Kappler)

In May of 1865, he and his wife were residing in Empire City, Dakotah County, Minnesota according to the state census.

Once settled in Winnebago, Nebraska, the site of the Indian Reservation, he seems to have stayed there until his death.

He may have died in his 85th year, or if we accept the ages given in the various censuses, his 89th year. He is buried by a pink granite tombstone with the false birth date of 1801. His plot is located at the Winnebago Cemetery, Winnebago, Thurston County, Nebraska, USA.

Is Alex your ancestor? Please don't go away!

ask our community of genealogists a question.
Sponsored Search by Ancestry.com
DNA Connections
It may be possible to confirm family relationships with Alex by comparing test results with other carriers of his Y-chromosome or his mother's mitochondrial DNA. However, there are no known yDNA or mtDNA test-takers in his direct paternal or maternal line. It is likely that these autosomal DNA test-takers will share some percentage of DNA with Alex: 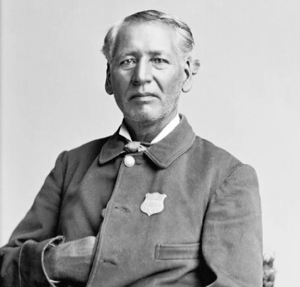 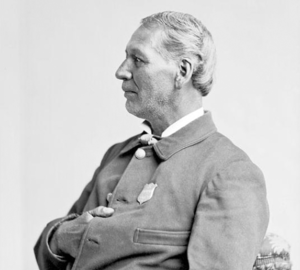 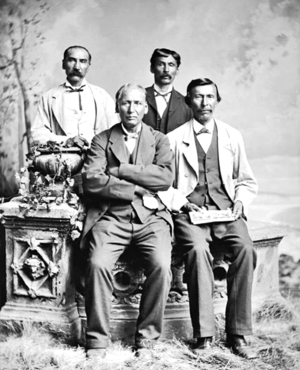 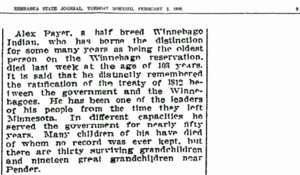