In 1900 census, Ludlow, Hampden, MA: Joseph Peet 26 (carder/hemp mill), wife of 6 years Gertrude 20. They've had 2 children but only Elizabeth age 1 still living. Joseph's brother William 19 & his new wife Flora 17 live with them, as does his widowed mother-in-law Alice Bottom 50. Also there is his sister Eliza 24 & her husband of 3 years Frank Seymour 23.[1]

Jeremiah 'Jerry' Peete: [5] Mooers Forks: Jerry Peete, 70, died Monday afternoon at the CVPH Medical Center. He was born Oct. 9, 1905 in Mooers Forks, the son of Joseph and Gertrude (Bottom) Peete. Survivors include two sisters, Mrs. Roy (Marceline) LaFond of East Hampton, Mass., and Mrs. Joseph (Harriette) Lucchese of Ozone Park, Long Island, two brothers, Russell of Mooers Forks and Lawrence of West Chazy; several nieces and nephews. Friends may call at the Drown Funeral Home in Mooers Wednesday from 2 to 4 and 7 to 9 p.m. Funeral services will be held 10 a.m. Thursday at St. Ann's Church in Mooers Forks. Burial will be in the parish cemetery in Mooers Forks.

Bootlegging.[6] First Blind Rum Runner Is Caught: Jerry Peets of Mooers Forks, said to be the first blind bootlegger ever caught in Clinton county, was lodged in the county jail at Plattsburg Sunday afternoon following his arrest by federal men. In Peet's wagon were eight cases of Canadian ale. The arrest took place near the fair grounds at Plattsburg.

Russell J. Peete:[8] Mooers Forks: Russell J. Peete, 79, died Saturday, Sept. 10, 1994, at his residence in Mooers Forks. He was born Nov. 13, 1914 in Mooers Forks, the son of Joseph and Gertrude (Bottom) Peete. He was a farmer in Mooers Forks for many years and a heavy-equipment operator. He also operated Twin Bridges Restaurant for 10 years. He was a member of St. Ann's Church and also the Mooers Knights of Columbus. He is survived by his wife, the former Isabell Supernaw; two sons, Kenneth Peete of Champlain and Gerald Peete of Champlain; one daughter, Mrs. Gerald (Norma) Menard of Cumberland; two sisters, Marceline Lafond of East Hampton, Mass., and Harriet Caruso of Long Island; 10 grandchildren and 19 great-grandchildren. Calling hours will be Monday from 2 to 4 and 7 to 9 p.m. at the E. F. Drown Funeral Service in Mooers. The Knights of Columbus should meet at 7:30 p.m. A Mass of Christian burial will be held at 11 a.m. Tuesday at St. Ann's Church. Burial will be in the parish cemetery in Mooers Forks. Memorial donations may be made to the Mooers Fire Department.

Lawrence H. Peete:[9] Lawrence H. Peete, 59, died Friday evening at his home in Ingraham. He was born Jan. 13, 1922, in Mooers Forks, the son of Joseph and Gertrude (Bottom) Peete. He operated Ronnie & Larry's Shell Station in Plattsburgh from 1959-1968. He was employed by Plattsburgh State University College until 1973. Mr. Peete graduated from St Mary's Academy in Champlain. He attended Wadhams Hall and St. Michael's College in Vermont. He served in occupied Japan during World War II and was a member of the Veterans of Foreign Wars Post 125 of Plattsburgh. He was also a member of the Plattsburgh Lodge of Elks. Survivors include his wife, the former Katherine DeCelle of Ingraham; one daughter, Kathleen Corley of Ticonderoga; one brother, Russell Peete of Mooers Forks; two sisters, Mrs. Marceline LaFond of East Hampton, Mass.; and Mrs. Harriet Caruso of Ozone Park, NY., and several nieces and nephews. Calling hours will be Sunday from 2-4 and 7-9 p.m. at the O'Neill-Redden-Drown Funeral Home in Plattsburgh. Funeral arrangements were incomplete Friday night. 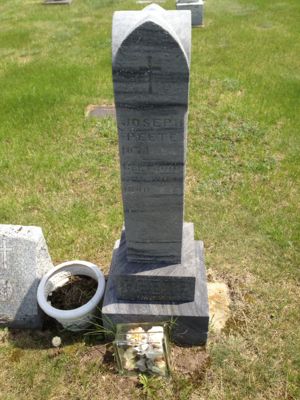