Gioacchino Vincenzo Raffaele Luigi was the sixth of the seven sons of Count Lodovico Pecci and his wife Anna Prosperi-Buzi. [1]

At age 8 he was sent with his brother Giuseppe age 10 to the Jesuit College in Viterbo in central Italy whare he stayed from 1818-1824.At this time he was called back home to rome with his brother Giuseppe when his mother was dying.There father wanted his children near him after the loss of his wife, and so they stayed with the family in rome and studied at the Jesuit Collegium Romanum. whare he attended from 1824 until 1832.

On 27 April 1843, Pope Gregory XVI appointed Pecci Archbishop and asked his Cardinal Secretary of State Lambruschini to consecrate him.

In 1844, upon his initiative, a Belgian College in Rome was opened, where 102 years later, in 1946, Pope John Paul II would begin his Roman studies. Two years later in 1847, Pecci became the object of media attacks after Pope Pius IX granted unlimited freedom for the press in the Papal States,

During 1848, revolutionary movements developed throughout Western Europe, including France, Germany and Italy. Also during that year on 8 December 1869, Pope Pius IX called the first Vatican Council. He probably was not unaware of it as the pope asked his brother to help plat the event.

Pope Pius IX died on 7 February 1878 and eleven days later, the conclave assembled in Rome. and decided on march 3rd to be pope and he was announced to the people and later crowned at this time.

Because he was 68 years old at the time he became pope. The people thought he would not live a long time but he remained pope from 1878 until his death in 1903.

During his reign the Roman Catholic Church achieved an international prestige it had not enjoyed since the Middle Ages.

He died 20 Jul 1903[2] in Vatican City, the longest-lived pope ever (as of 2018) and then was buried in St. Peter's Basilica only very briefly after his funeral. He was later moved to the very ancient basilica of St. John Lateran in 1924.

Is Leo XIII your ancestor? Please don't go away!

ask our community of genealogists a question.
Sponsored Search by Ancestry.com
DNA
No known carriers of Leo XIII's ancestors' DNA have taken a DNA test. 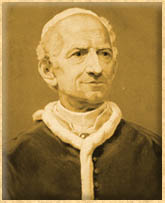